Last year, a team of researchers claimed that carbon nanotube filters they had developed could transport water faster than biological membrane channels. But these findings are now being disputed by biophysicists, who say faster water transport in the nanotubes is not possible without violating fundamental thermodynamic laws.

In 2017 we reported on research from Aleksandr Noy at the Lawrence Livermore National Laboratory, US, and colleagues, who developed artificial water channels made from short lengths of narrow carbon nanotubes inserted into a lipid bilayer.1 The team reported that water could be transported through the nanotubes six times faster than through aquaporins, water-selective protein channels that ferry water across living cell membranes. 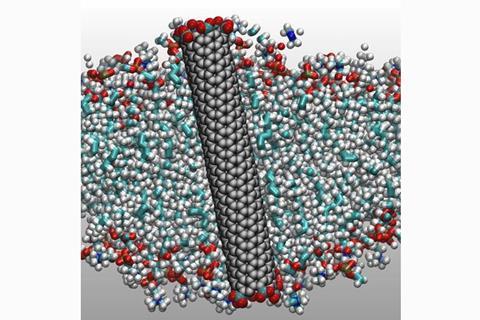 But scientists at Johannes Kepler University in Linz, Austria, are now challenging this claim. ‘The mismatch between the high transport rates and the extremely high energetic costs immediately jumped out from the paper,’ says Peter Pohl, who co-authored an article questioning Noy’s team’s findings2 together with colleague Andreas Horner. It’s a mismatch, he explains, because a higher activation energy to start a transport process or chemical reaction generally reduces the probability of it happening and thus lowers the rate at which it occurs.

Water flow through aquaporins requires a lower activation energy, as there is six times less friction between channel walls and the water than in the nanotubes. Since the osmotic gradient is the only driving force for moving water through both aquaporins and nanotubes, Pohl and Horner say it is hard to see how the nanotubes could move water faster when a higher activation energy is required. To explain the faster water transport rate, they suggest some water may have leaked out at the nanotube-bilayer interface rather than passing through the channel.

In response, Noy and colleagues have published a reply defending their work.3 Noy says that Horner and Pohl’s main objection is that the combination of the reported flow rates and activation energies does not fit a simple transition state theory formula. However, he explains that using simple transition state theory for water transport in small diameter channels has been known to be problematic because collective modes of water motion can be present that can effectively lower the activation energy. This is what Noy thinks is happening to explain the anomaly of how the nanotubes move water faster, particularly since these collective motions have been observed in simulations of water transport in carbon nanotubes.

‘The strong temperature dependence that we see is certainly curious, but the main result of our paper does not violate any thermodynamic laws, in fact it matches most of the predictions made by the nanofluidics community,’ explains Noy.

The team performed further experiments using calcium chloride that obstructed the nanotube channels with calcium ions and found that water transport slowed down, suggesting that water was indeed moving through the nanotubes and not leaking out.

But Pohl remains unconvinced. ‘The calcium experiment is not conclusive because the interaction with the tubes is not specific – calcium also binds to lipid molecules,’ he says. ‘My guess would be that it seals the leak between the tubes and the lipid membrane.’ He also suggests that there could be other leakage pathways.

‘The letter from Horner and Pohl raises some important concerns that are critical to consider in experimental studies of transport in artificial and biological water channels. In particular, their activation energy argument seems quite important to think about,’ comments Manish Kumar, who investigates biomimetic water channels at Penn State University, US. ‘Noy and coworkers have provided an adequate response to every point raised in the letter while also agreeing that more work is needed to unravel the connection between measured activation energies and ways to correlate them to the single channel permeability.’