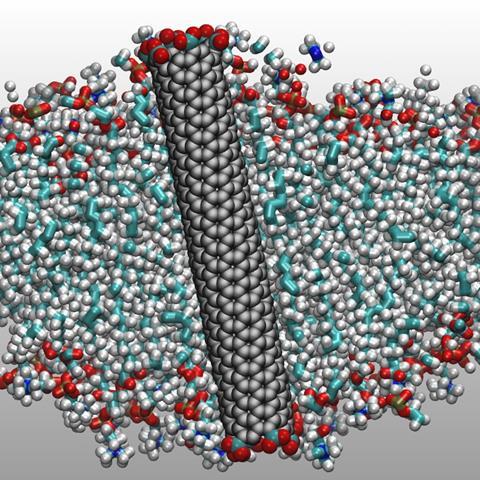 For the first time a bioinspired carbon nanotube (CNT) water filter has been made that can transport water faster than its biological counterparts.1 The work could lead to new desalination membranes and ways to purify water to meet ever increasing global demand for fresh water.

Cells possess water selective proteins called aquaporins which rapidly transport water through a membrane while rejecting salt ions. Their efficiency is attributed to their narrow 0.3nm channels, which force water molecules to travel in single file. Wider CNTs have been shown to enhance water transport before due to their smooth interiors but none have been able to coerce water into single file to become a serious rival to aquaporins.

Now, Aleksandr Noy at the Lawrence Livermore National Laboratory, US, and colleagues have discovered that short lengths of narrow CNTs – dubbed CNT porins (CNTPs) – can confine water into single file chains and transport it faster than aquaporins. Moreover, these CNTPs also have a high degree of ion selectivity that can reject salt in water saltier than seawater.

’Researchers have been interested in creating nanochannels de novo from non-biological materials for quite some time; however, the difficulty arises in meeting both water selectivity and salt rejection requirements simultaneously,’ says Ramya Tunuguntla, co-first author of the study. ‘The simple CNT template has the advantage of “no moving parts” and in combination with the potential of their variable rim chemistry, provides an attractive precursor for creating artificial water transporters.’

The lab invented CNTPs in 2014.2 They comprise a short piece of carbon nanotube akin to a drinking straw that pokes through a lipid bilayer to form a defined membrane pore. CNTPs spontaneously insert into a lipid bilayer because the cutting process creates hydrophilic carboxyl groups at the ends of the nanotube.

Following recent simulation studies that predicted sub nanometre CNTs can transport water molecules one-by-one, the researchers wondered if CNT porins could mimic aquaporins. To do this, they inserted CNTs 10nm long and just 0.8nm wide into the lipid bilayer of water-filled vesicles. They then measured water permeability by exposing the vesicles to a hypertonic buffer solution. This created an osmotic pressure which caused water to flow out through the CNTPs.

The researchers think the narrow CNTPs are able to transport water faster because aquaporins have amino acids lining their pores. These amino acids can be hydrogen bond donors or acceptors for incoming water molecules, which limits water flow. Conversely, the walls of CNTPs cannot form hydrogen bonds and are atomically smooth which permits almost unimpeded water flow.

The results revealed that water transport rates through the CNTs was six times greater than that of aquaporins. Further experiments measured the passage of positively and negatively charged ions which showed that CNTPs transport cations two hundred times more efficiently than anions at salt concentrations higher than seawater. However, by manipulating the charge state at the rim of the CNTs, ion selectivity was demonstrated which allowed both cations and anions to flow.

‘Artificial water channels are the future of desalination and highly permeable channels and complete ion exclusion is required,’ comments Mihail Barboiu who studies bimimetic membranes at the University of Montpellier, France. ‘This study shows the promise of narrow CNTPs, for which the water transport exceeds that of aquaporins and of wider CNTP pores with the highest water permeability ever reported.’

‘The authors have really broken the size barrier of a nanometre for carbon nanotubes and for the first time shown its potential as a selective but fast water transporter rivalling those seen in biological water channels,’ comments Manish Kumar, who investigates biomimetic water channels at Penn State University, US. ‘The next step perhaps would be to incorporate these channels at high density in suitable planar substrates to create efficient desalination and other molecular separation membranes.’