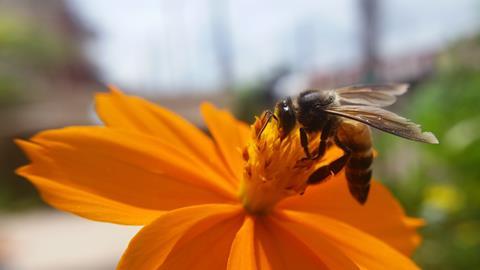 Scientific review confirms that honeybee health is harmed by the pesticides

The UK will support a Europe-wide ban on three neonicotinoid pesticides, following a review of the latest scientific advice. The decision reverses the government’s previous opposition to prohibition of the world’s most extensively used pesticides, because of a growing understanding of the harm they’re doing to bees. Studies across Europe and in Canada suggest that the the harm they can cause to bees goes beyond the season in which they’re applied.

The EU introduced a moratorium on the use of clothianidin, imidacloprid and thiamethoxam on flowering crops in 2013, but it now wants to extend the restriction to non-flowering crops. This is based on a risk assessment carried out by the European Food Safety Authority (EFSA) of more than 100 studies since then.

The UK Expert Committee on Pesticides has concluded that neonicotinoid exposure under field conditions can have an ‘unacceptable effect on honeybee health’ and that wild bees are ‘negatively impacted’ by exposure to neonicotinoid residues. UK environment secretary Michael Gove said he understood the importance of pesticides to farmers but that ‘where there is evidence that human activity is contributing to pollinator decline, we have a duty to act.’ He added that EU-wide restrictions would remain in place after Brexit, unless new evidence emerged.

The Department for Environment, Food & Rural Affairs’ chief scientific adviser Ian Boyd said that together with ‘the widespread and increasing use of these chemicals, the available evidence justifies taking further steps to restrict the use of neonicotinoids’.

A spokesman for Bayer, which makes clothianidin and imidacloprid, said ‘such a ban would seriously impact the UK’s ability to grow high quality wheat, barley, sugar beet and some vegetable crops’. The UK has permitted emergency exemptions for oilseed rape and sugar beet, but last year refused applications on the grounds that farmers hadn’t shown chemical intervention had a positive impact on yield.

Ben Woodcock, an ecological entomologist at the UK’s centre for Ecology and Hydrology, and lead author on some of the neonicotinoid studies which UK and European advice is based on, accepts that pesticides ‘are vital, but levels of use are arguably very high’. He adds that as neonicotinoids were originally believed by regulators to be safe, it suggests that after a pesticide has been approved ‘understanding its impact requires ongoing monitoring’, especially as use can change.

Boyd and Alice Milner at Royal Holloway, University of London have recently suggested a global monitoring programme for pesticides, similar to the pharmacovigilance process for drugs. As well as providing more information on long-term and widespread use of pesticides, Milner says ‘this would lead to better risk-based decisions for pesticide safety, increase trust in regulation and overall would help sustain the use of chemical technologies, which are important for global food production’.

There has also been mounting concern about environmental protection that’s currently offered under the auspices of the EU, such as the neonicotinoid ban, after the UK leaves the bloc. But last week, the environment secretary said he would consult on setting up a new environment body, which would ideally be in place on the day the UK leaves the EU, and potentially has the power to fine government. He told parliament’s environmental audit committee that there needed to be some check on those who ‘were careless about environmental protection’, and that without some means of holding governments and other public bodies to account, ‘there is always the danger that environmental damage can be inflicted […] without ensuring justice can be done’.