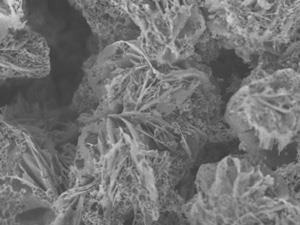 Electron micrograph of the lithium-based negative electrode. Unusually, water is required for the battery to operate correctly

A lithium-air battery with superior efficiency and stability has been developed by researchers in the UK. While previous designs have been plagued by the presence of water, the new design actually requires water to operate. This allows the battery to maintain a high energy efficiency of up to 93%, and to maintain values close to this for hundreds or even thousands of cycles.

Lithium-air batteries have the highest theoretical charge capacity of any batteries, comprising a negative electrode of lithium metal which reacts with oxygen when the battery discharges and is reduced back to the metal on recharge. The positive electrode is an inert, porous carbon material, which maintains electrical contact between oxygen and electrolyte and stores the oxidised form of lithium. In a traditional lithium-air battery, this is lithium peroxide (Li2O2). Unfortunately, this clogs the pores in the carbon electrode. High overpotentials are then required to recharge the battery, reducing the energy efficiency and causing unwanted side reactions that can damage the battery components. An additional problem with is that the batteries can be intolerant of even small amounts of water as it leads to the formation of lithium hydroxide (LiOH), which is more stable that lithium peroxide and thus difficult to remove.

In the new research, materials chemist Clare Grey and colleagues at the University of Cambridge added lithium iodide (LiI) to the electrolyte. This has been used as a mediator in some experimental cells to reduce the overpotential of the charge process. To their surprise, they found that the reduced graphene oxide electrode turned from black to white when the battery was discharged: they analysed the electrode using both x-ray diffraction and NMR spectroscopy, finding that the discharge product was, in fact, lithium hydroxide. The researchers believe that, on discharge, the lithium is electrochemically oxidised to lithium superoxide (LiO2), and that in the presence of lithium iodide this reacts to form lithium hydroxide and oxygen gas. The researchers do not yet understand the importance of lithium iodide in this latter process, but it clearly plays some role as the discharge product was lithium peroxide when it was not added.

Crucially, the lithium hydroxide does not lead to battery failure. The researchers found that, in their design, it can be almost completely removed at only a tiny overpotential of 0.2V, producing a battery with an energy efficiency of up to 93% that appears more stable than a traditional lithium-air battery, with only small decreases in energy efficiency over 2000 cycles when the cell is cycled at low charge/discharge rates. ‘We’ve got cells that have been cycling for a couple of months,’ says Grey. The researchers believe that on recharge, the I- ions are electrochemically oxidised to I3-, allowing the liberated electrons to chemically reduce the lithium. Nevertheless, Grey freely admits that ‘this is an early-days result’ and says, ‘We don’t understand everything that’s going on.’ One puzzle is that the formation of lithium requires protons, and the researchers had not deliberately added a proton source to the battery. Additional experiments, in which they added 2H2O to the electrolyte and found that LiO2H was produced during discharge, indicated that the protons were coming from residual water in the supposedly anhydrous electrolyte.

‘It’s a very interesting paper with unexpected electrochemistry results, and nice NMR studies,’ says electrochemist Yang Shao-Horn of Massachusetts Institute of Technology in the US. She is intrigued about the proton source needed to form lithium hydroxide. If the protons come from water, she says, this water needs to be considered when estimating the maximum energy density per unit mass. ‘The authors use anhydrous electrolyte – typically that means we have tens of parts per million of water. If that were the case, then to generate the capacities we see we would have to use tens of millilitres of electrolyte. This amount is unusually high, and it would significantly add to the battery weight and lower battery specific energy.’