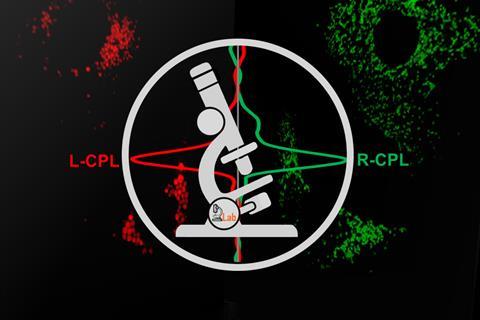 A new type of light microscope has been built that can identify and monitor luminescent chiral molecules in living cells. The researchers say that their circularly polarised luminescence laser scanning confocal microscope can be used to study interactions between cells, organelles and drugs, opening new possibilities in chemistry and biomedicine.1

Pal points out that although many molecular building blocks of life are chiral, there wasn’t a suitable way to track them experimentally in living organisms until now. He mentions that the available techniques, which haven’t changed much in the last 50 years, are mostly limited to large areas. Those previous systems recorded the CPL signals using a scanning, step-by-step approach whereas the new spectrometer can ‘look’ at the whole spectral region at once, allowing quick averaging and selection of the area of interest, he says. ‘This novel detection methodology and the speed of data acquisition are key when the technique is applied in a microscope setup.’

Building on earlier work, the team constructed an add-on module that can be connected to any confocal microscope. ‘Our previous instrumental development consisted of two main elements: rapid CPL spectroscopy2 and individual left- and right-handed CPL epi-fluorescence microscopy3,’ explains Pal. ‘The novelty of this setup is that now, for the first time ever, simultaneous high-resolution 3D imaging can be undertaken using both left and right-handed circularly polarised light.’ He adds that the optical components that make up the module are readily available and easy to assemble.

The researchers also developed a series of bright luminescent chiral probes that can be activated using two-photon excitation. This allowed them to image living tissues up to several millimetres thick. ‘Two-photon excitation uses red or near-infrared light,’ notes Lorenzo Di Bari, an expert in chirality and spectroscopy at the University of Pisa, Italy, who was not involved in the study. ‘In this spectral region, light penetrates well into living tissues and photodamage is strongly reduced.’

‘In most cases, the differential emission between left and right CPL is tiny,’ adds Francesco Zinna, one of Di Bari’s colleagues. ‘The researchers used europium-based probes, for which such differences are rather large, around 10%.’ Zinna notes that combining these new probes with an efficient experimental design has made this microscope possible. ‘The winning point is the clever microscopy setup combined with a probe that specifically stains cell organelles, providing strong and highly polarised emission.’

The chiral probes can also be designed to localise selectively in certain cell compartments. ‘We found that the right and left-handed versions go to different cell organelles,’ Pal says. He and his team tested the methodology using synthetic test targets and mouse skin cells. ‘With the new microscope we can now track chiral molecules in space and real time, so previously uncharted features of chiral systems in biology and chemistry can be examined for the first time.’