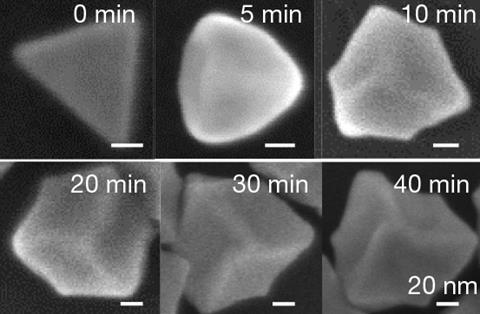 Scanning electron microscopy images of the chiral nanoparticles as they form

Left-handed gold nanopropellers are more than 1000-fold more efficient as flu vaccine adjuvants in mice than their right-handed counterparts, scientists have discovered. This is the first time immune response has been shown to differ depending on nanoscale chirality.

As biological molecules are often chiral, they usually interact differently with each enantiomer of a chiral molecule. But nanoparticles are much larger than most molecules, so it was unclear whether proteins would be able to distinguish enantiomeric particles. Moreover, chiral nanoparticles often contain two types of chirality: one corresponding to chiral ligands and one corresponding to the whole particle’s geometry. 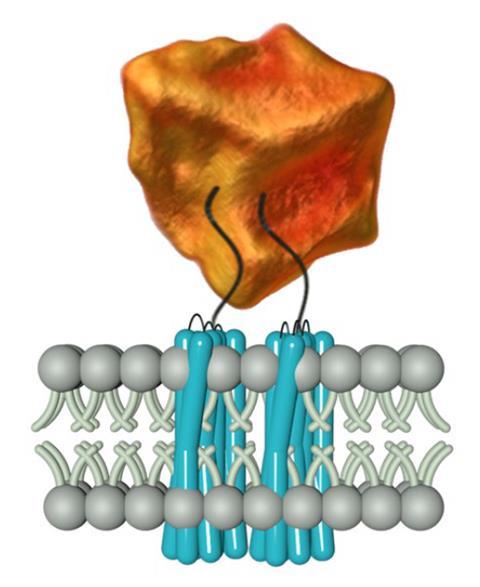 Researchers have now confirmed that gold nanoparticle enantiomers are recognised differently by the immune system purely because of their propeller-shaped geometry. The team grew the gold propeller enantiomers using chiral dipeptides and circularly polarised light but removed the peptides before testing to ensure any effect was the result of nanoscale chirality.

Racemic inorganic nanoparticles can activate the immune system. But a left-handed propeller particle turned out to be twice as efficient as its mirror image when it came to being taken up by macrophages, white blood cells that are part of the immune system. In cell cultures, the macrophages exposed to the left-handed particles produced more than twice as much of certain inflammatory proteins. Similar results were seen in live mice injected with the nanoparticles.

Mice given an influenza vaccine containing left-handed particles produced a 1258-fold greater immune response, measured by their antibody titre, than those given the right-handed particles. Moreover, the former group did not develop abscesses in their lungs as they did when given alum, a common commercial adjuvant.

The team suggests that immune responses could be tailored by fine-tuning nanoparticles’ chirality.