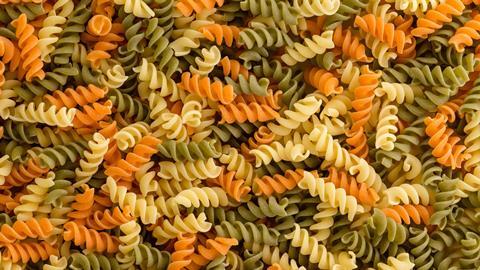 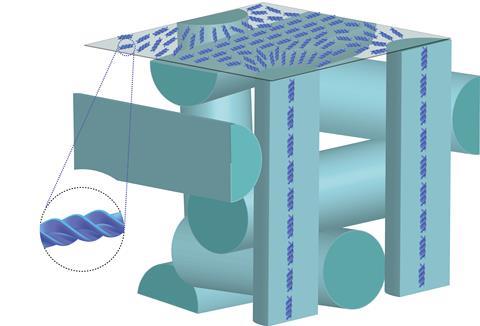 Polymers that emit chiral light could lead to more efficient screens for our electronic devices. However, the origins of the chiral optical phenomena in these systems are unknown. Now, scientists may have found an answer: tiny, twisted structures, shaped like fusilli pasta, arranged in a weakly ordered blue phase.1 This new molecular model provides the perfect recipe to prepare strong chiral light-emitting polymers.

Traditional organic LED (OLED) technologies emit unpolarised light, a mixture of left and right-handed beams. On top of that, displays usually have an antiglare filter to minimise reflection. However, this comes at a cost – the antiglare layer blocks half of the light, making these devices extremely wasteful. ‘That is why we design materials and devices that emit circularly polarised light,’ explains Jess Wade, a researcher at Imperial College London and first author of the paper. ‘With light that twists in only one direction, we can bypass the antiglare filter and double display efficiency.’ 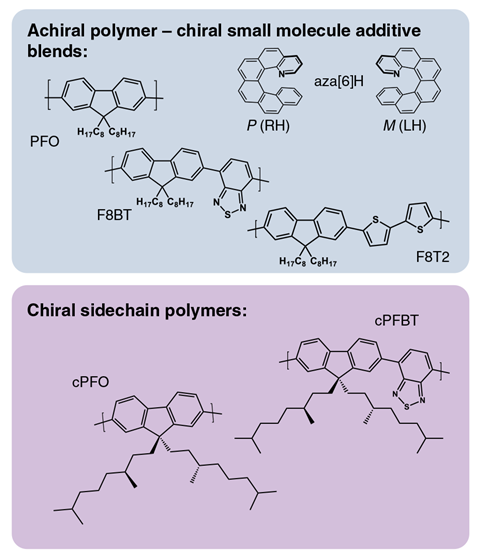 The polymer sytems the team worked with

Researchers have found several materials that can emit strongly chiral light, among them polymers. ‘Until now, we believed that their optical activity came from rod-like molecules and polymer chains forming spiral staircase-like stacks,’ says Wade. But this model doesn’t explain some experimental observations. ‘On close inspection, we found no evidence of the Bragg reflection or linear dichroism, properties that are characteristic of these kind of structures,’ she adds.

So, they decided to investigate further. The team carried out a comprehensive study using several experimental techniques, such as high-resolution atomic force microscopy, spectroscopic ellipsometry and x-ray scattering with polarised light sources. ‘We found that, in the absence of an alignment layer, polymer films had none of this long-range structural chirality,’ explains Matthew Fuchter, who co-led the study. ‘Instead, the circular polarised light has a molecular origin.’ It seems that small, corkscrew-shaped polymer fibrils have natural optical activity. 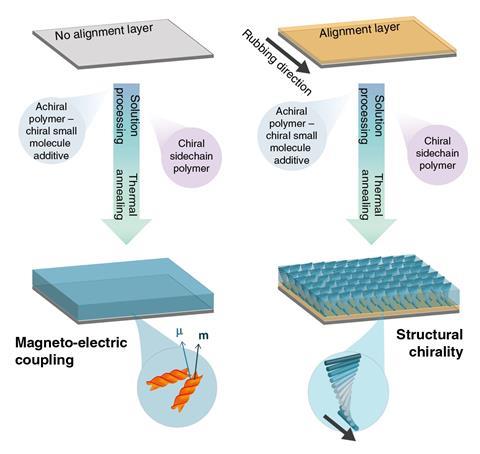 Thomas Penfold, an expert in light-emitting materials at Newcastle University, UK, says that the key is dissymmetry, the extent to which the light is circular polarised. ‘Normally, you need thick, ordered structures to generate big dissymmetry,’ says Penfold. The small fusilli structures create dissymmetry locally without piling up, which should allow researchers to make thinner devices. Moreover, he finds the synthetic approach rather clever as ‘they use achiral polymers, inexpensive and accessible, and just a pinch of chiral additives’, he explains. ‘That small amount is enough to observe huge polarisation effect.’

Beyond OLED displays, ultra-thin polymer films that emit twisted light could be used in encrypted communications and biosensing. The team has also observed the handedness of circularly polarised light inverts with the direction of the electric field applied.2 ‘This hints that interesting spin-related phenomena are at play, offering hope for their application in room temperature spintronic devices,’ Wade notes.