A single bond made up of only π orbitals has been discovered in a silicon analogue of bicyclobutane. This is a rare find since π bonds are usually accompanied by σ bonds when they are found in double or triple bonds.

Compounds with π single bonds are highly unstable, isomerising into singly σ-bonded structures. A few have been made though, notably a P2B2 ring with a single π bond between the boron atoms. 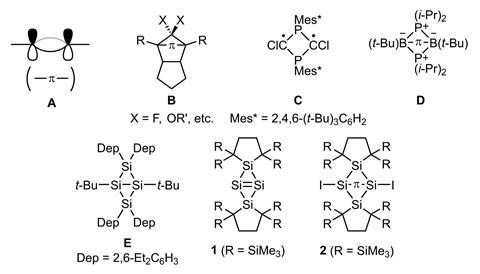 Two chemists from Japan have now made 1,3-diiodotetrasilabicyclo[1.1.0]butane, a surprisingly stable example of a compound featuring a π single bond. The team iodinated a precursor with a central tetrasilabicyclobut-1(3)-ene ring, converting the double bond between the bridgehead silicon atoms into a single bond in the process.

While this type of reaction usually creates singly σ-bonded species, the bond between the bridgehead silicon atoms turned out to be made up of p orbitals – a clear indication that it is a π bond. The red–orange compound is air-sensitive but otherwise stable at room temperature, probably because its extremely bulky substituents stop it from breaking apart.