More than 40 years after it was first made, chemists have revisited ‘superbenzene’ or kekulene, snapping the first atomic resolution images and finally unravelling its true aromatic nature.

The electronic structure of kekulene – a doughnut-shaped macrocycle made of 12 fused benzene rings – was debated long before it was first synthesised in 1978. Some researchers imagined kekulene to be superaromatic, behaving like two fully aromatic annulene rings one stuck inside the other. Others believed it to behave more like six individual aromatic systems connected by non-aromatic bridging groups.

When kekulene was finally synthesised, it proved challenging to work with. ‘The extremely low solubility of kekulene in organic solvents makes it very difficult to purify and characterise,’ explains Marcin Stępień from the University of Wrocław in Poland. His team made a substituted kekulene derivative in 2016, but wasn’t involved in the new work. 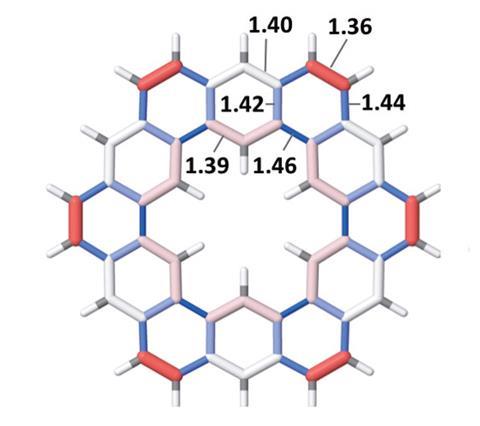 Molecular structure of kekulene with bond lengths shown in angstroms

‘Even recording a proton NMR [nuclear magnetic resonance] spectrum of kekulene was a major endeavour in 1978,’ Stępień says. It required dissolving the compound in deuterated trichlorobenzene at 215°C, and performing 50,000 NMR scans, which at the time probably meant an entire day of instrument time. Whether kekulene really was superaromatic remained a mystery.

Now, 40 years later, a team led by Dolores Pérez and Diego Peña at the University of Santiago de Compostela in Spain, along with colleagues at IBM Research and the University of Aveiro, Portugal, has revisited kekulene and recorded the first atomic force microscopy images of the molecule. They prove that kekulene isn’t superaromatic but is best described as six disjointed aromatic π-electron sextets.

‘Most of the recent studies conclude that the superaromatic stabilisation of kekulene is negligible,’ explains Perez. ‘Both our experimental and computational results are in agreement with this, as they show no evidence of macrocyclic conjugation.’

‘I was very excited to see [this work] published,’ says Stępień. ‘I think that the work nicely exemplifies some of the factors that contributed to the remarkable revival of aromatic chemistry in the 21st century.’ Kekulene had been almost forgotten after its first synthesis. But the discovery of graphene, and the possibility of organic electronics based on nanographenes, renewed chemists’ interest in polycyclic aromatic hydrocarbons.

The reason no-one had returned to kekulene for so long may be because it is so difficult to make. Perez calls the 1978 synthesis – a painstaking 11-step process including one reaction with less than 3% yield – ‘a masterpiece in organic synthesis, difficult to improve, but also difficult to repeat’.

To make things easier this time around, Perez says they were able to get production of a key intermediate down to a single step – previously it took four – while also increasing its yield four-fold. The researchers used a commercially available bistriflate to generate a bisbenzyne. In a double Diels–Alder reaction, it combines with styrene into the crucial anthracene derivative (essentially one half of the kekulene macrocycle).

Perez hopes to use the same bisbenzyne strategy for making other polycyclic conjugated systems. She adds that her team is also looking into using kekulene as a model for graphene pores.

Update: Further institutions involved in the work were added on 22 October 2019.