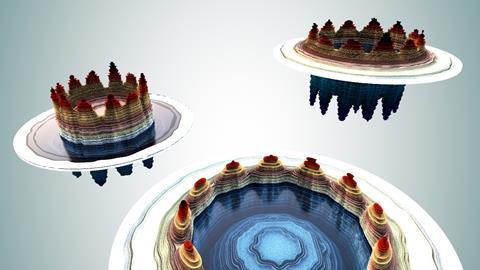 Largest molecular wheel ever made pushes limits of aromaticity rules

Hückel’s rule, developed to explain the properties of the six aromatic electrons in benzene, is still valid for a giant aromatic ring with 162 π electrons that is many times the size of the simplest aromatic.

Erich Hückel developed his quantum theory of molecular orbitals in 1931. One consequence of his calculations was that rings with alternating single and double bonds and 4n+2 π electrons should be aromatic like benzene. Later work described those with a number divisible by four, like cyclobutadiene, as anti-aromatic.

In chemical terms, aromatic rings are strongly stabilised, while anti-aromatics are destabilised and less commonly encountered. A physical measure to check if a molecule is one or the other is the ring current induced when the molecule is exposed to a magnetic field such as during nuclear magnetic resonance spectroscopy. In aromatics, the current will oppose the external magnetic field within the ring, while in anti-aromatics it will coincide with it.

Over the decades, many aromatic and anti-aromatic molecules have been synthesised, and all obeyed Hückel’s simple rule. Porphyrins, for instance, the macrocycles found in haemoglobin and chlorophyll, provide a natural example with 18 π electrons. It remained unclear, however, how large aromatic rings can get before Hückel’s rule collapses.

Three years ago, Harry Anderson’s group at the University of Oxford, UK, constructed the world’s largest aromatic ring with a total of 78 π electrons. The molecular wheel was made up of six porphyrin rings grouped around a benzene hub, with six spokes connecting to zinc ions complexed by the porphyrins.1

Now, the chemists have broken their own record with a giant aromatic wheel containing a grand total of 162 π electrons. Doubling the size of their previous record holder, they constructed the wheel’s rim out of 12 porphyrin rings, put two stacked benzene hubs in the middle and created 12 longer spokes.2 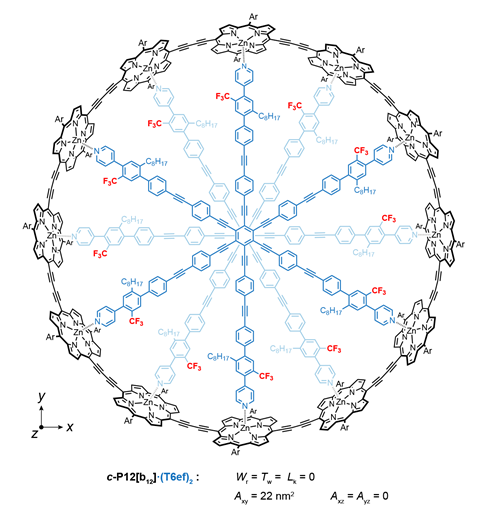 The new molecular wheel, which is the largest aromatic structure ever created

They also combined two halves of the smaller wheel with four spokes each to form an elongated construct with eight porphyrins. All in all, the researchers produced eight different nanorings in various oxidation states, accounting for 24 different molecular species. In all cases where ring currents could be detected, they were in accordance with Hückel’s rule.

‘It is amazing that the simple Hückel 4n+2 rule predicts the aromaticity or anti-aromaticity of a molecule better than sophisticated density functional theory calculations,’ Anderson tells Chemistry World.

The porphyrin constructs readily accept or release electrons, which enabled the researchers to study aromatic and anti-aromatic states using the same molecular structure. The different redox states can be distinguished by NMR, even when they are present in the same solution. Thus the system provides a convenient switch and readout for its aromatic properties.

The group added a further twist to the tale when they combined the large 12-porphyrin cycle with two smaller hub-and-spoke molecules. As they had hoped, the ring wrapped itself into a figure-of-eight to accommodate both hub complexes. As the two parts of the ring now run in opposite directions, theory had predicted that the ring currents cancel out – a phenomenon the group was now able to observe for the first time. ‘The size of our nanoring makes it possible to achieve the required geometry for current cancellation,’ Anderson explains. This allowed the researchers to use geometry and redox state as independent switches to manipulate the aromatic properties of nanorings.

Marcin Stępień from the University of Wroclaw, Poland, welcomed the work, highlighting the molecular architecture. ‘The porphyrin nanoring chemistry is an important synthetic accomplishment: it uses ingenious methods of supramolecular chemistry for covalent assembly of nanoscale architectures with atomic precision. This covalent linking is essential for building the giant conjugation pathways in the nanorings,’ he told Chemistry World.

Rainer Herges from the University of Kiel, Germany, praised the advance into the terra incognita between classical and quantised electromagnetic systems, commenting: ‘The first results are already unexpected and surprising. I am sure the exploration of the field will unravel further fascinating effects and applications such as quantum computing.’

Meanwhile, the upper limit of Hückel’s rule remains to be found.