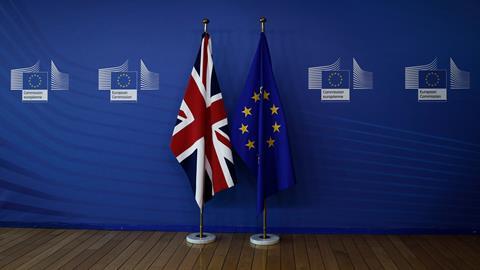 ‘No deal’ Brexit would leave UK science staring down the barrel

Leaving the EU without a deal would cost UK science dear – in terms of influence, funding and collaborative networks, and it could take years to rebuild these connections. That’s according to scientists and science policy advisers. They add that the government’s recently published guidance on what a ‘no deal’ Brexit would mean for science and medicines, leaves many unanswered questions, not least on researcher mobility.

On funding, the government has committed to underwriting UK participation in the EU’s giant science programme, Horizon 2020, until it wraps up. In a no deal scenario, the UK’s status changes to that of a third country, but the government now says it intends for UK researchers and businesses to be able to apply to Horizon 2020 programmes open to third country participants, and that it will guarantee funding where they are successful. Umbrella funding body UK Research and Innovation is setting up a system to register all Horizon 2020 participants so that the UK can take over paying those scientists working on EU projects.

But the details of participation as a third country have yet to be discussed and agreed with the European commission. ‘I’m disappointed that we have to talk about a no deal Brexit, and while the government is saying the right things – in the subtext there is hardly anything concrete,’ suggests Juan Matthews, a visiting professor at the University of Manchester’s Dalton Nuclear Institute, who’s been involved in government discussions on nuclear research.

As yet, there’s nothing in place ‘to address the long term problems of how we manage movement of researchers between the EU and UK after Brexit,’ says Beth Thompson, head of UK and EU policy at the Wellcome Trust. ‘Even short term mobility – research missions or to attend a conference – the ability to travel is critical. We don’t know what the status would be of that if there’s no deal,’ adds Mindy Dulai, a senior policy advisor at the Royal Society of Chemistry, the publisher of Chemistry World.

What is clear is that without a deal the UK becomes ineligible for several programmes where it has hitherto been highly successful. These include the prestigious European Research Council grants, which fund the best researchers in the world to run projects based in EU member states, creating employment for post docs and PhDs; the Marie Skłodowska-Curie actions, to support a range of academic training and exchange; and the SME instrument for innovative small business. An analysis by Mike Galsworthy at Scientists for EU shows that so far the UK has attracted €2.1 billion (£1.9 billion) – 45% of the almost €5 billion worth of grants awarded across the EU.

As a third country the UK would not be able to meet all the rules governing them. For example, the principal investigator on ERC grants must work in an EU or associated country, so the current status of researchers also becomes a concern. The breadth and complexity of the Marie Skłodowska-Curie programme is an issue, says Dulai. ‘Depending on the specific instrument, its conditions and the participating nations in any live individual grant, some streams might be at risk if the status of the UK changes. It’s a challenge for researchers to both navigate this but also to try to figure out what they can do to mitigate it.’

The UK’s leading role as a coordinator in multi-national projects will be ‘dead in the water’, according to Galsworthy. His stark assessment is because EU projects are set up so that the coordinator has the job of distributing EU funds to all participants – but if the coordinator is a third country, then the EU will not reimburse it. ‘You won’t get the money for you and all your partners from the commission. Rather, your own country has to pay – for everyone. That is why there are so few third country coordinators.’ Galsworthy notes that the US had 1060 project participations in Horizon 2020, but only one coordinator role, while the UK has had 10,580 participations and 3513 coordinator roles. The guidance notes say only that the government is ‘seeking to discuss how this could be best addressed’ with the commission.

Managing the short-term impact of no deal is crucial, but ‘our concern then becomes access to the future framework programme: if there’s no deal, that leaves us without an arrangement for cooperation with our biggest research collaborator,’ says Thompson. ‘If we just have a vacuum infrastructure is affected too. It’s hard to think of an element of the way we collaborate that’s not affected.’

There’s just as much uncertainty surrounding nuclear research after the government’s decision to leave the European nuclear body, Euratom. Euratom’s current research and training programme is expected to be extended by the EU until 2020, and the government is offering the same underwriting guarantee as for Horizon 2020 projects. But if there’s no deal and the UK is no longer a member of Euratom, or Fusion for Energy, it will no longer be able to collaborate on Iter, the project to build the world’s largest experimental fusion reactor.

‘There’s the question of the people actually working on Iter itself – individual scientists and engineers, plus all the companies supplying things,’ says Matthews. ‘If we leave Iter we will no longer be eligible to contract on completing the construction of the reactor and its experimental programmes.’

‘When I’ve raised this – [the government] always say we will buy into Iter. How much will it cost? … I’ve never seen any figure quoted.’ The US and Japan, he notes, are paying billions to take part in Iter.

Where there has been progress is on regulation. The Nuclear Safeguards Act, passed in June, provides legislative underpinning for a UK safeguards regime to replace Euratom. ‘They now need to ensure the right structures are in place to implement it,’ says Peter Haslam, head of policy and the Nuclear Industry Association.

The Office for Nuclear Regulation (ONR), which runs the UK’s nuclear safeguards regime, says it has recruited and is now training 14 nuclear inspectors to become nuclear safeguards inspectors, and is developing an IT system to enable it to report to the International Atomic Energy Authority. An agreement signed in July with the IAEA means that UK inspectors will take over the responsibilities of Euratom inspectors, and it allows the basis for nuclear trade with other nations.

Consultations with industry on proposed nuclear safeguards regulation close this week, to enable the ONR to meet its international obligations from day one of Brexit, and ‘to build, over time, a safeguards regime equivalent in coverage and effectiveness to that currently provided by Euratom’, according to the government’s no deal guidance.

It also needs nuclear cooperation agreements in place with four countries who require them for civil nuclear trade. These have been signed with the US and Australia, and Haslam says the government has assured the nuclear industry that the others – with Japan and Canada – are ‘well on track’ to be in place by end of year. ‘We’re in a good position but there are a lot of loose ends to tie up,’ he says.

If there’s no deal, the UK will cease to be part of the EU regulatory framework that ensures human medicines are safe and effective. Crucially, the sharing of systems and exchange of data will be at an end.

The UK’s own regulator – the medicines and healthcare products regulation agency (MHRA) – will take on the regulatory role for all medicines on the UK market, and that will mean legislative changes. It is planning a consultation in the autumn that will cover the regulation of medicines, medical devices and clinical trials. Observers expect these will be very detailed and technical, reflecting work that’s been going on for over 18 months.

The MHRA is already the lead regulator on a large number of approvals for the European Medicines Agency (EMA), so it has the skills necessary, remarks Jean McHale, professor of healthcare law at the University of Birmingham. However, what happens to approval of paediatric medicines and drugs for rare medical conditions, is unresolved. The highly specialised job of approving them is handled centrally by the EMA, which the UK will no longer be a part of after March 2019. A separate agreement will be needed, says McHale. The agency, itself, is moving from London to Amsterdam, and has had to scale back its work programme as staff losses begin to bite.

The government has committed to complying with key elements of upcoming EU regulation on medical devices and in vitro diagnostics and says it will ‘align where possible’ and ‘without delay’ with new EU clinical trials regulation. These won’t be in force in the EU until after Brexit. Drugs licensed in Europe would still be recognised in the UK, although reciprocity is not guaranteed.

‘The UK, alone, is not in a position to deal with regulatory issues where there is genuine collaboration going on – for example in clinical trials,’ Thompson points out. ‘We know what laws apply at the UK site – but what’s the status at the EU site?’ 40% of trials run from the UK also have another site in the EU.

Another major issue is sharing of data. Currently, personal data from a clinical trial or epidemiological study can be shared freely across borders. ‘If there’s no deal we lose that arrangement,‘ says Thompson. It won’t be impossible to share data in future ‘but it becomes much more complicated… for academics who might not have the same legal support as big companies, the bureaucracy becomes crippling’.

A real concern is that we end up being a second or third country for the launch of new drugs. According to Steve Bates, chief executive of the BioIndustry Association, ‘a “no deal” Brexit would mean a significant increase in replicative bureaucratic red tape for developers of innovative medicines. Introducing additional regulatory process for a market worth less than 3% of the world’s value adds additional time and expense for companies who have a choice as to where they launch new therapies.’

Scientists for EU worry that in a no deal scenario, getting a subsequent agreement on science may not be a priority for government, and the UK will be left with third country status while other pressing issues are resolved. Thompson adds: ‘We hope all this is reversible – not just for the UK but for the EU’s sake. We as a continent need to stand together in the face of increasing competition from other parts of the world. We need to pull together.’