A UK government economic analysis of the impact of leaving the EU indicates that chemicals will be the industry hit hardest by Brexit. The cross-Whitehall briefing, originally produced in January 2018, explores three trade scenarios, each with overall adverse effects on UK–Europe trade that are greater than any trade benefits gained elsewhere.

The analysis ranks the pharmaceutical and chemical industries as the first and third most dependent in the UK on trade with the EU, respectively. Consequently in the worst ‘no deal’ scenario, the gross value added (GVA) – a figure that reflects production within a country – from chemicals falls by 16%, compared with current levels. Even the best case scenario sees a 3% decline. While the analysis does not model the pharmaceutical industry specifically, GVA for ‘other manufacturing’ declines 8% in the worst case trade scenario and 1% in the best case. 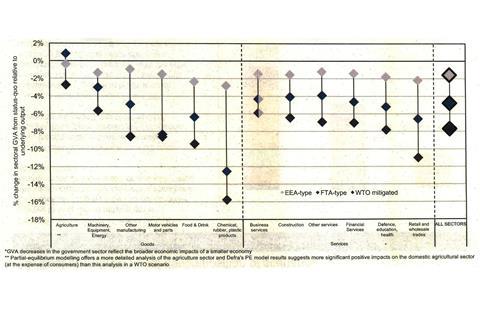 The chemicals sector is projected to shrink under any of the three post-Brexit trade scenarios. Graph from a scanned copy of the report.

Currently, European agencies are determined that ‘all existing registrations end’ on Brexit, Newport says. In a speech at the Lord Mayor of London’s Mansion House in March 2018 Prime Minister Theresa May said she sought a more favourable agreement. She committed the government to explore the terms on which the UK could remain part of these agencies as associate members. While the CBA has welcomed this, Newport also wants greater certainty.

That sentiment is echoed by Steve Elliott, chief executive of the UK’s Chemical Industries Association, which represents both the chemical and pharmaceutical industry. ‘What we now need is the negotiators to get on with negotiating,’ he says. ‘Only when that progresses will we know what’s really going to happen.’

Reach, in particular, is a trade barrier for companies outside the EU, which need either EU-based importers or appointed ‘only representatives’ (ORs) to register their products. ‘20% of chemicals were registered by UK companies,’ Newport explains. But now CBA members are setting up operations in other countries to ensure continued access to the market, he says, and are considering moving more functions overseas.

The previously ‘secret’ economic analysis document has been released following a judicial review brought by the Good Law Project and Green Party MEP Molly Scott Cato. The first scenario includes a high level of access to EU markets, following the model of the European Economic Area (EEA) covering Iceland, Liechtenstein, and Norway. This scenario would see the least financial impact. However, because it needs UK agreement to continued labour mobility, the government has already ruled it out.

The second scenario is a free-trade agreement (FTA), similar to that recently agreed between Canada and the EU. The final scenario is where the UK and EU fail to reach a deal, and fall back on World Trade Organization (WTO) rules. Based on Theresa May’s comments in a speech in Florence, Italy, in October 2017, the UK is hoping for a bespoke trade deal somewhere between the EEA and FTA scenarios.