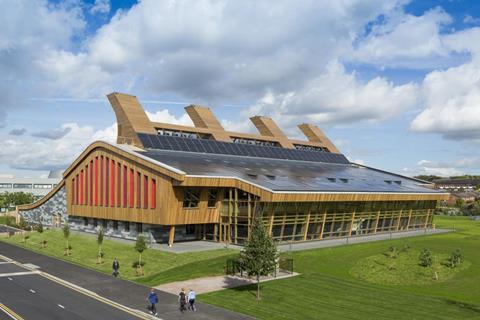 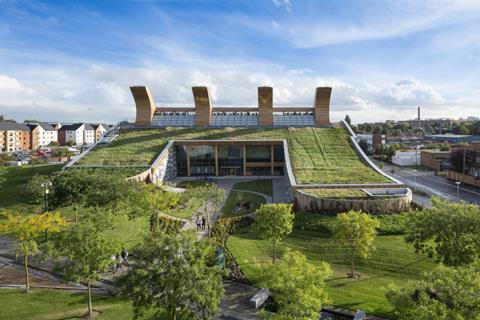 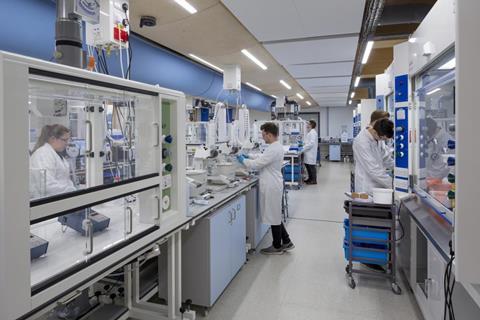 The labs themselves have a number of features to reduce water and energy use. Teams that have moved into the labs are also working to reduce their environmental impact by changing the way they do chemistry without compromising on the science 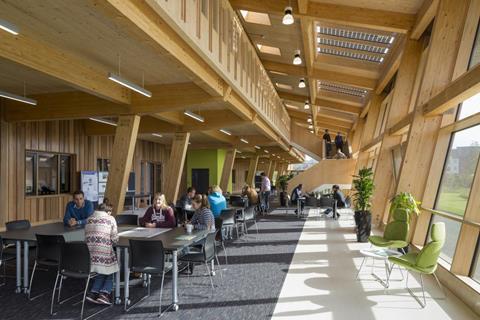 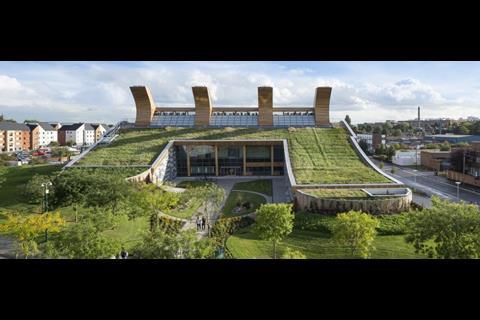 The new sustainable chemistry labs of the University of Nottingham have risen phoenix-like from the ashes. The original building slated for completion in mid-2015 burnt down in September 2014. The new labs, which officially opened last week, will be carbon neutral and feature innovative technology to cut energy and water consumption that will pay back the energy invested to build them within 25 years.

The fire of 2014 completely destroyed Nottingham’s GSK Carbon Neutral Laboratories for Sustainable Chemistry, which was over two-thirds complete when disaster struck. The exact cause of the fire was never determined but Nottinghamshire Fire and Rescue ruled out arson and said an electrical fault was the most likely cause.

The now complete £27 million building has been built on a brownfield site that was formerly the site of bicycle makers Raleigh. The funding to construct the new labs was finalised in 2013, with the Higher Education Funding Council for England (Hefce) providing £10.5 million, which was matched by £12 million from UK pharmaceutical giant GlaxoSmithKline (GSK). A further £4 million was provided by the University of Nottingham and £750,000 from arts and sciences charity the Wolfson Foundation.

To cut the building’s carbon footprint it was constructed with a timber frame using 100 spruce trees and built around carbon neutral principles. After 25 years of operation the labs will have offset the carbon emissions discharged during their construction. This is possible thanks to a 1150m2 photovoltaic array and a biomass fuelled heat and power system that supplies the labs with all the power they need, as well as supplying neighbouring buildings.

The new building benefits from a number of features specifically designed to cut the labs’ waste, energy and water use. David Chambers-Asman, head of operations and administration at Nottingham’s faculty of science, says that they have had a rethink of the way labs run day-to-day. This has meant a cultural change that has not only seen the labs designed around greater sharing of resources like fume cupboards, but also a desire by incoming research groups to, for instance, cut the use of rare earth metals and avoid chlorinated solvents whenever possible.

To save water the labs have on demand cooling units for rotary evaporators and condensing reactions. Vacuum for filtration and other purposes is provided on demand rather than running large volumes of water through aspirators to create suction. ‘A lot of reduction of raw water usage is key for us and there’s other technologies we want to try in the future like mixed solvent organic waste […] some of the research based here is actually about separating it through electrolysis of the organics and the inorganics from the water so we can run clear water and have less waste,’ says Chambers-Asman.

The labs have been up and running for six months now and provisional data indicates their energy use is much lower than similar sized chemistry labs. Power consumption is currently around 167kWh/m2/year – just 45% of that of a chemistry building that matches up to the Hefce Higher Education Energy Performance Improvement (Heepi) project’s benchmarks for a modern chemistry lab. Chemistry labs typically consume a lot of energy to heat them and the new building is performing well here too. Its heating requirements are about 74kWh/m2/year, which is 25% of the Heepi benchmark for labs of this size. Despite these achievements there’s still room for improvement as the labs are using more power than predicted. The team keeping an eye on power usage says that consumption is expected to drop further as people get used to the building’s energy efficiency features.

Andrew Witty, GSK’s chief executive, speaking at the labs’ opening, said that the pharmaceutical industry needs to think much more sustainably when it comes to making drugs. He noted that Singapore, where GSK has a number of sites, produces a significant portion of the world’s drugs, and as a result ships vast quantities of solvents to Germany for destruction. This is one of the areas that he said needs to be targeted to cut the pharmaceutical industry’s carbon footprint and that these new labs can be at the forefront of helping to tackle this problem. GSK has itself set a target of becoming carbon neutral by 2050. ‘To reach carbon neutrality we need to completely reinvent the chemistry of every drug production process,’ Witty pointed out.