Researchers in Canada have shown their physical grasp of the atomic scale by repeatedly folding and unfolding individual biomolecules like molecular origami using a unique ‘optical tweezers’ tool. Michael Woodside’s University of Alberta team used their bespoke setup to pull apart folded proteins and DNA and then push them back together again thousands of times. The scientists claim that this approach has made them the first to directly observe single biomolecules as they move through the ‘transition states’ between the folded and unfolded forms. ‘We’ve been able to experimentally test some basic physical theories about how folding works at a level that hasn’t been possible before,’ Woodside tells Chemistry World. 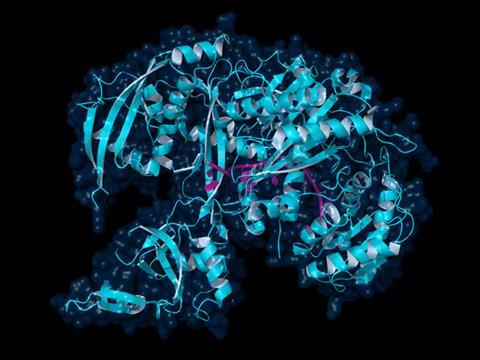 A protein's three-dimensional structure is essential to its function

To directly look at the fleeting processes involved, they turned to high-precision optical tweezers. In their approach, each end of the biomolecule being studied is attached to polystyrene beads less than a micrometre in diameter. Photons from lasers shone at the beads hit them, exerting a tiny force that moves the beads.

Woodside’s team wanted to time their molecules’ unfolding and refolding as they applied this force. However, normally pulling the beads with optical tweezers is like dragging footballs attached to loosely coiled springs through honey. The springiness means there’s a delay in the bead movement, metaphorically due to the spring’s extension as the football moves through the honey. The researchers effectively tightened the springs, meaning that there’s less of a delay, enabling them to measure folding and unfolding at shorter timescales than usual. This ‘requires advanced instrumentation that has to be custom-built to pretty demanding specifications’, Woodside underlines.

As a test system, the scientists studied a ‘hairpin’ structure, a basic structural element in single-stranded DNA and RNA. They found that it spent around 30 microseconds in the transition state between folded and unfolded. They also looked at prion proteins, which are responsible for mad cow disease when they don’t fold properly, to explore the still-unsolved problem of how they misfold. The prion misfolding process takes much longer, around 500 microseconds. Woodside hopes that the information gained from this study ‘may help explain why protein folding sometimes goes wrong, leading to disease’.

Sergi Garcia-Manyes from Kings College London, UK, calls the study ‘a very nice piece of work’ exploring ‘nooks-and-crannies of the still largely unknown transition state conformations’. ‘By pushing the instrument resolution, this represents a tour-de-force in the field,’ he adds. ‘The challenge is now to get further detail.’