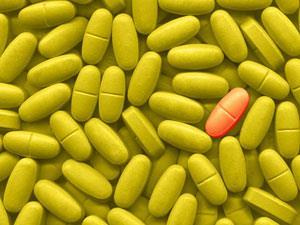 Drugs to treat rare diseases were worth $50 billion in 2011

A new report by Thomson Reuters offers clear confirmation that developing drugs for rare, or orphan, diseases is economically attractive, despite the smaller patient pool. A period of ‘tremendous growth’ in orphan drug development is set to continue as big pharma realises the revenue potential of drugs that address unmet medical needs.

The global orphan drug market was worth just over $50 billion (£31 billion) at the end of 2011. During 2001–2010, the market grew 25.8%, compared to 20.1% for a control group of non-orphan drugs. ‘This data, combined with the increasing number of orphan drug approvals, suggests that the compound annual growth rate of launched orphan drugs will outshine that of the non-orphan control drugs over the next 30 years,’ states the report. Growth is partly due to the high number of biological orphan drugs, as opposed to small molecule drugs. Biological drugs are less likely to have generic equivalents than small molecule drugs so are still valuable to their developer after their patent expires.

Given the limited patient pools (the EU defines an orphan disease as one with a prevalence of one in 2000), historically it’s been small biotech companies that have developed orphan drugs. ‘That trend began to change about four or five years ago,’ says Peter Saltonstall, chief executive of the National Organisation for Rare Diseases in the US, ‘but the velocity of the change is increasing now. Companies are expending serious resources and many of the mainstream pharmaceutical companies have established R&D units specifically focused on rare diseases just within the past few years.’

Orphan drugs are clearly an important part of the global pharma and bio industry’s future, Saltonstall says. ‘One-third of the new molecular entities approved by FDA (US Food and Drug Administration) last year were orphans,’ he adds. ‘And some of the most innovative and interesting research being done at this time is in the orphan space. It’s becoming increasingly evident that companies of all sizes may find a niche there.’

There has been a massive increase in treatments available, agrees Nick Meade of the Genetic Alliance UK, which supports patients affected by genetic conditions. But there is still a clear unmet need, he stresses. There are 83 market authorisations for orphan drugs in the EU, he says, but global estimates of the number of rare diseases range from 5000–7000, with that figure rising at around 250 a year. 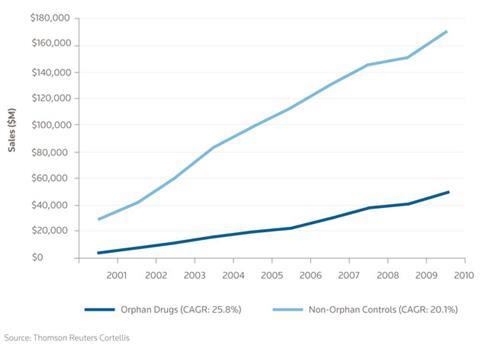 The growth in orphan drugs has been driven by many factors including tax credits, grants, waived FDA fees, reduced timelines for clinical development and a higher probability of regulatory approval. The report also lists commercial drivers such as premium pricing, faster uptake, lower marketing costs and longer market exclusivity.

Legislation has played a huge role in encouraging investment, particularly the 1983 US Orphan Drug Act. ‘During the decade before 1983, only 10 drugs were developed by industry for rare diseases,’ says Saltonstall. ‘Since 1983, well over 2000 have been designated orphans and more than 400 of those have been approved. Similar acts around the world and the 2000 EU legislation have also played an important role.’

The report is also clear that higher prices offset economic concerns over smaller patient populations. Prices can be higher if there are fewer, if any, competitors; and there is a high level of unmet need. In 2010, the industry’s most expensive drug, Soliris, which costs more than $409,000 per year and is used to treat the rare life-threatening blood disease paroxysmal nocturnal haemoglobinuria, brought in $541 million for Alexion Pharmaceuticals. ‘This is a considerable achievement in terms of revenue, considering only 4000–6000 people suffer from this disease in the US,’ the report points out.

However, there are several challenges associated with orphan drug development. Obstacles include difficulties in locating and recruiting patients, and logistical problems organising trials. These factors increase costs significantly.

The challenges are significant, Meade acknowledges. For example, the current EU Clinical Trials Directive means conducting multi-country trials can be very expensive. ‘Often a trial will involve 12 people across six countries but incur the same admin costs as a trial for 20,000 people across three countries … Hopefully recruiting people for trials will also become easier as social media allows companies to reach people round the world.’

There is an increasing degree of optimism for the orphan drug market among investors too, according to Manning & Napier, a New York-based financial services firm. This is reflected in the higher valuation of companies, such as Alexion, compared with traditional primary-care focused companies.

Angela De Martini, a consultant with Easton Associates in London, says that everyone in the industry – big, small and specialised – is looking at orphan drugs as an attractive option. ‘But you need to get the economics right,’ she points out. ‘Not every orphan drug will be economically viable. You can’t throw them all in the same pot. Some “ultra orphan” drugs for super rare diseases will have a few hundred patients and making their economics favourable would be considerably challenging.’