Multi-threat protection in the making 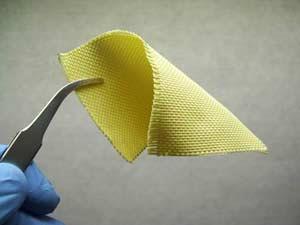 Scientists in the US have synthesised an ultrathin inorganic bilayer coating for Kevlar that could improve its stab resistance by 30% and prove invaluable for military and first-responders requiring multi-threat protection clothes.

Developed in 1965 by Stephanie Kwolek at DuPont, poly(p-phenylene terephthalamide) (PPTA), or Kevlar, is a para-aramid synthetic fiber deriving its strength from interchain hydrogen bonding. It finds use in flexible energy and electronic systems, but is most commonly associated with bullet-proof body armour.

However, despite its anti-ballistic properties, it offers limited cut and stab protection. In a bid to overcome this drawback, Sarah Atanasov, from Gregory Parsons’ group at North Carolina State University, and colleagues, have developed a TiO2/Al2O3 bilayer that significantly enhances the cut resistance of Kevlar fibers. The coating is added to Kevlar by atomic layer deposition, a low temperature technique with nanoscale precision.

Despite its increased hardness over both titania and PPTA, alumina has a negative effect on cut resistance if used alone. When introduced, its tetramethylaluminium (TMA) precursor diffuses and reacts beneath the surface of the PPTA. This degrades the mechanical strength of the polymer by cutting through its backbone and breaking bonds. In contrast, the titania layer is formed by titanium tetrachloride reacting near the polymer surface, which has little effect on the backbone. It must therefore be introduced first to act as a barrier between the TMA and PPTA. This synergistic relationship between the metal oxides is essential to the overall success of the coating. 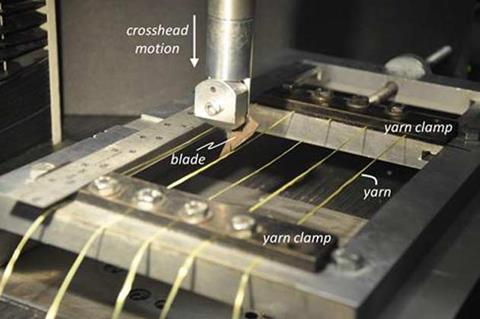 Materials specialists are enthusiastic about the work. Takashi Uemura, from Kyoto University in Japan, finds it interesting that one can ‘add “armour” to Kevlar to improve its protective properties.’ Bin Ding, of Donghua University in China, says the most interesting result is that ‘Kevlar sees noticeable improvements without substantially affecting its durability, flexibility or weight.’ Other techniques have made concessions in at least one area.

Efforts are now underway to test this coating on a larger scale and the group have high hopes that their findings can one day be applied to protective garments.