A method for making ‘patchy’ polystyrene particles takes the guesswork out of patterning microparticles. The patchy particles could be components for self-assembling microstructured materials, the researchers say.

Stefano Sacanna, at New York University, imagines that solutions of ‘patchy particles’ – where the patches act as attachment sites for ‘bonds’ between the particles – could potentially be ‘fluids from which materials can emerge by self-assembly spontaneously,’ much like how the villain rises out of liquid metal in the movie The Terminator. Controlling the number and position of the patches controls how the structure will assemble. For example, a particle with four tetrahedrally arranged patches on its surface can be the core of a tetrahedral collection of micrometer-sized particles, analogous to the arrangement of hydrogens bonded to carbon in methane. However, it’s hard to create patterns of patches on particles predictably or reproducibly on a large scale.

Plasticine model illustrating the concept of colloidal fusion. When compressed, the tetrahedral cluster evolves into a patchy sphere.

To synthesise their patchy particles, Sacanna and his colleagues looked to a process familiar to anyone who has played with modeling clay. First, four larger balls are arranged tetrahedrally around a smaller, softer central ball. When the outer balls are squashed together to make a single ball, the softer inner sphere deforms to fill the gaps, eventually being pushed out to form a tetrahedral pattern of patches on the surface of the resultant sphere.

In Sacanna’s lab, the core is a liquid droplet of methacrylate-functionalised silicone oil and the outer spheres are solid polystyrene particles. The two components have opposite charges, which drives them to spontaneously assemble into clusters. The squashing force is achieved by plasticising the polystyrene spheres with tetrahydrofuran, which allows them to flow and form a single sphere, driven by surface tension. As the polystyrene particles are drawn together, the core is gradually squeezed out, producing spherical particles with a tetrahedral arrangement of oily patches on its surface in greater than 90% yield. 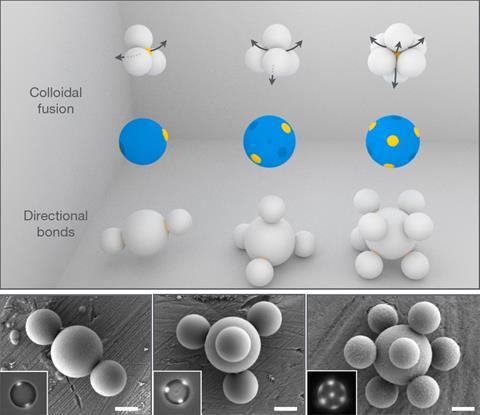 Particles with different numbers and arrangments of patches can be formed controllably and predicatably. All scale bars are 1 μ m.

The researchers can predict the pattern of patches on the final particle using a computer model that accounts for the various factors that influence the interfacial forces. By changing the size of the droplets and particles, they also synthesised particles with two or eight patches on their surface. Simulating a pattern first means that researchers then only have to perform syntheses using experimental conditions that produce patterns they want, Sacanna says.