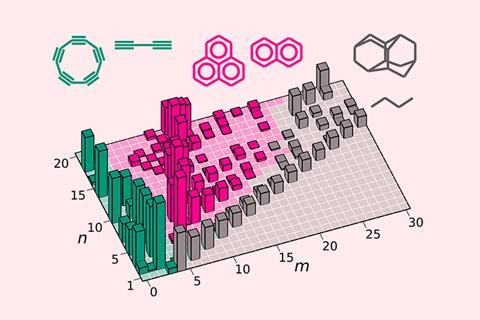 Calculating the energy of hundreds of hydrocarbons has led to the identification of ‘magic’ molecules with special stability. ‘It’s like the periodic table of hydrocarbons,’ says lead author Artem Oganov from the Skolkovo Institute of Science and Technology in Moscow. ‘This new map lets you draw important conclusions at a glance.’

To create this map, the team simulated the structures of all possible hydrocarbons, with up to 20 carbon atoms and 42 hydrogen atoms. This provided a systematised survey of the molecules’ energies in the ground state, information that was previously unavailable. Then, they spotted ‘magic’ molecules using simple stability standards. ‘If a molecule is more stable than its neighbours in the chemical space … we call it magic,’ explains Oganov.

The authors theorise that electronic effects, bond strain and delocalisation are among the prime suspects that contribute to this super stability. The map revealed a number of ‘islands’ and ‘ridges’ of stability, populated by prominent groups of molecules such as carbon clusters, polyynes and polyaromatic hydrocarbons. Most of these magic molecules prevail in natural environments, including interstellar space. ‘So far, our approach can’t predict absolute abundances,’ says Oganov. Nevertheless, this solution provides qualitative indications – ‘magicity’ indicates importance. The concept is borrowed from the world of atomic nuclei and nanoparticles, where it also successfully predicts stability and abundance.

Judit Zádor, a theoretical chemist at Sandia National Labs in California, US, says ‘this map explains a lot of observations about hydrocarbons in real physical systems’. Moreover, the systematic style establishes interesting trends based on chemical composition. According to Zádor, ‘these trends [will] likely extend beyond the explored region’, which could help in the study of larger species, difficult to capture computationally.

However, Jean-Louis Reymond, who explores chemical space at the University of Bern, Switzerland, is less enthusiastic. ‘I don’t see anything that wasn’t known before,’ he says. ‘The notion of magic molecules doesn’t really exist in organic chemistry.’

‘Organic chemists are probably not surprised,’ says Zádor, ‘but seeing things organised … and discovering patterns … lies at the heart of chemistry.’ This approach could explore trends in more complex molecules than hydrocarbons. ‘We’re now applying this methodology to other molecules, [including] the molecules of life,’ says Oganov. Maybe ‘magicity’ could clarify mysteries like the origins of life. Again, Reymond remains sceptical. ‘Life emerged [from] reducing entropy locally to store energy in molecules,’ he says. ‘Everything goes away from highly stable molecules.’

‘Maps put ideas in context,’ explains Zádor. This work could help ‘orients [us] in the vast space of molecules’, she says. ‘It’s a great tool,’ she adds, because it captures behaviours and tendencies that could otherwise be overlooked. Like Mendeleev’s periodic table, it condenses conclusions in a single picture. ‘And that’s extremely valuable,’ concludes Oganov.