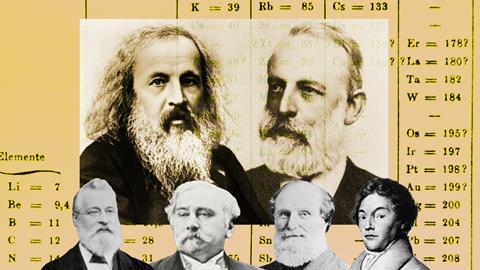 By the time Dmitri Mendeleev published his first periodic table of the elements in 1869 he was far from alone in seeing how the known elements could be grouped into families with chemical affinities. Most famously, the German Lothar Meyer had pretty much deduced the same arrangement, and both built on the earlier work of (among others) Johann Döbereiner, Alexandre-Émile Béguyer de Chancourtois, William Odling and John Newlands, who perceived family relationships such as those between the alkali metals or the halogens.1 By the 1860s, some form of the periodic table had become inevitable.

Such convergence of scientific ideas when the time is ripe is a common pattern: think of the co-discovery of evolution by natural selection in the 1850s by Charles Darwin and Alfred Russel Wallace, or of the so-called Higgs mechanism that underpins the Higgs boson, deduced in the mid-1960s by no fewer than six physicists. (Peter Higgs deserves credit, however, for realising that it implied the existence of the particle discovered 10 years ago using the Large Hadron Collider at CERN.)

How, though, does the accumulation of data and insights condense into a breakthrough in understanding? It’s tempting to suppose there’s some critical mass that, once exceeded, will inevitably nucleate the idea in the minds of anyone attentive and smart enough to heed it. But this assumes that such people have all the necessary ingredients at their fingertips. Even in Mendeleev’s time the chemical literature was too vast for any individual to track it all. Today even subdisciplines produce an utterly overwhelming flow of new results.

That raises the tantalising thought that some unmade discoveries might already be out there, all the components available in the literature but as yet unassembled. Might the solution to quantum gravity need just a sufficiently attentive individual to pull the existing threads together?

A new study by researchers at the Max Planck Institute for Mathematics in the Sciences in Leipzig makes that situation plausible.2 They have analysed how knowledge of ‘chemical space’ developed in the decades before Mendeleev and Meyer presented their periodic tables, and conclude that the ‘backbone structure’ of the table, as revealed in the known chemical compounds, was already clearly recognisable in the early 1840s. In other words, they say, the system for organising the elements ‘was already encoded in [chemical] space for about two and half decades before its formulation’.

Even in the 19th century, chemists were starting to collect and systematise knowledge about what we now call chemical space. In 1881, Friedrich Konrad Beilstein – a friend of Meyer’s, and Mendeleev’s successor at the Imperial Technical Institute in St Petersburg – published the first edition of his Handbook listing the 15,000 organic compounds then known.3 After Beilstein’s death in 1906, others continued to expand subsequent editions. And the German chemist Leopold Gmelin produced a Handbook of Inorganic Chemistry in 1817 that was also regularly updated thereafter. The Gmelin and Beilstein collections are now merged into a database called Reaxys that is still maintained and updated – a unique record of how the known chemical space evolved since the late eighteenth century.

The Leipzig team, led by Guillermo Restrepo, looked at the Reaxys records from 1800 until two months before the publication of Mendeleev’s first table in 1869, by which point it comprises 11,356 chemical substances composed of 60 or so elements. These records track the changing emphases of chemistry. Before 1830 most known compounds were those of metals, but subsequently organic chemistry blossomed and the record becomes dominated by the elements C, H, O and N.

As this chemical space expands, the relationships between elements come into focus – but not entirely smoothly. 1826 was a pivotal moment, apparently because the rate of element discovery momentarily slowed, prompting chemists to explore more deeply the chemistry of those already known. Restrepo and colleagues estimate that around 40% of the similarities between elements evident in 1826 remained in the final table. The period 1835–45 was also a significant period of emergence of the underlying organisational system.

To convert knowledge of compounds into relationships between elements, one needed the chemical formulae – which depends on having accurate atomic weights. It’s often suggested that the revision of atomic weights at the 1860 chemical congress in Karlsruhe, due especially to the work of the Italian Stanislao Cannizzaro, was crucial. However, the Leipzig team say that using the atomic weights proposed in 1843 by Gmelin to structure the system of elements evident at that point ‘produce[s] systems remarkably similar to that of 1869’. In other words, a pretty good periodic table could have been deduced even then.

To convert knowledge of compounds into relationships between elements, one needed the chemical formulae – which depends on having accurate atomic weights. It’s often suggested that the revision of atomic weights at the 1860 chemical congress in Karlsruhe, due especially to the work of the Italian Stanislao Cannizzaro, (whose 1858 paper was distributed there) was crucial. On seeing that paper, Meyer later wrote that ‘The scales seemed to fall from my eyes’. However, the Leipzig team say that using the atomic weights proposed in 1843 by Gmelin to structure the system of elements evident at that point ‘produce[s] systems remarkably similar to that of 1869’. In other words, a pretty good periodic table could have been deduced even then.

Why wasn’t it? Did social and institutional factors delay that step, as the Leipzig team speculate? That’s a question for historians of science – but one that perhaps only this deep dive into the data could have revealed.

1 E Scerri, The Periodic Table: Its Story and Its Significance. Oxford University Press, 2006