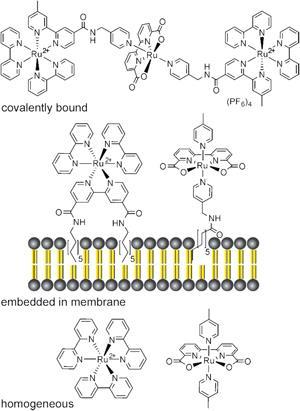 For the first time, a water oxidation catalyst and photosensitiser have been co-embedded into a membrane to make an artificial water photooxidation system. The arrangement can generate oxygen from water at far lower catalyst concentrations than ever before.

Chemical systems to turn solar energy into fuel are of paramount importance in the quest for sustainable green energy. Mimicking natural photosynthesis, the aim is to achieve sunlight-driven conversion of water and carbon dioxide into carbohydrates and oxygen. One branch of the process involves photocatalytic water splitting, comprising oxidative and reductive half reactions. The more complex photoxidation step involves a four-electron transfer reaction and very reactive oxygen intermediates. In nature, this extremely endothermic reaction is performed by Photosystem II (PSII), using membrane bound chromophores and catalytic units.

Homogeneous and heterogeneous artificial photocatalytic water oxidation systems have been reported before but both have their drawbacks. The homogeneous, solution phase process can be considered to be three-dimensional. This has implications on the concentration dependence of the process, making it diffusion controlled. While the heterogeneous, solid case is a static model, unable to adapt and rearrange. Nature, however, uses a different approach and replicating this more accurately will lead to a dynamic, fluid system that can operate at far lower catalyst concentrations.

Inspired by nature’s design, Burkhard König at the University of Regensburg in Germany has co-embedded the two required subunits, an amphiphilc photosensitiser and a water oxidation catalyst, into a phospholipid bilayer membrane to make versatile functionalised vesicles. By ensuring the redox partners are in close proximity it increases their local concentration, permitting photoxidation at very low concentrations. It also reduces the average distance between them for electron transfer. The subunits can undergo continuous self-assembly and reorganisation, leading to clustering and phase separation which provides further benefits for the photocatalytic performance. 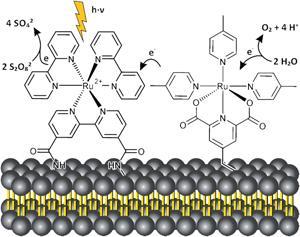 ‘The key difference of the membrane bound system is that it still works at very low concentrations, where homogeneous systems fail,’ says König. His funtionalised vesicles generate oxygen with a turnover number of 394 at an extremely low catalyst concentration of 500nM; the homogeneous system’s activity would be negligible at this level.

Haruo Inoue of the Center for Artificial Photosynthesis at Tokyo Metropolitan University in Japan finds this tactic to promote catalytic activity interesting and says ‘it could be a meaningful method for light-harvesting/hole-harvesting devices.’

By combining the water oxidation with a hydrogen generating unit, König sees two approaches for making functional devices. The first is solution based, incorporating a redox shuttle to form a ‘soft device’ akin to the Z-scheme in PSI and PSII. Alternatively, the two units can be immobilised on an anode and cathode, respectively, for a wired device. König hopes to attempt the electrode coating method in the near future.