When temperatures reach far below soapy water’s freezing point, –6.5°C, bubbles freeze in a dizzying display of swirling ice crystals. Unlike in bulk water, there is no single freezing front. As ice crystals form where the bubble touches the cold surface, they quickly move upwards, dancing wildly around the surface before slowing down and merging into a solid ice layer.

Although there are many videos documenting this snow globe effect during local cold snaps, Jonathan Boreyko’s team from Virginia Tech in the US is the first to investigate its physics. The researchers revealed that the Marangoni effect – the same effect responsible for a number of other phenomena like the bouncing droplet – creates the dancing ice crystals. 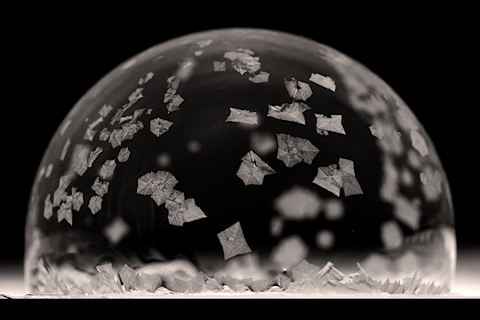 The Marangoni effect is responsible for the beautiful, dynamic ice crystals that swirl around a bubble’s surface as it freezes

The Marangoni effect is caused by a surface tension difference, which can be generated by a solute gradient, a chemical reaction or – as in this case – temperature variations.

When a bubble settles on a surface at –18°C – as cold as a home freezer – its starts to solidify from the bottom up. Within a few milliseconds, the latent heat released during freezing creates a Marangoni flow, which detaches nanoscale ice crystals from the freeze front, carrying them upward. As each ice crystal grows it gains its own sphere of latent heat, creating an even more chaotic Marangoni heat flow – the ice crystals start to swirl around wildly before settling down. After 23s the bubble is entirely frozen.

However, the snow globe effect only works when the air temperature is the same as the surface that the bubble is resting on. A bubble that lands on a –20°C surface in a room temperature lab simply freezes from the bottom up. Although the researchers initially observed Marangoni heat flow, the bubbles upper region remains too warm and any snow globe effect is suppressed. Instead, the freeze front slowly moves upwards but never reaches the top. The bubble remains partially frozen until, after 10 minutes, its liquid top dries out and collapses.