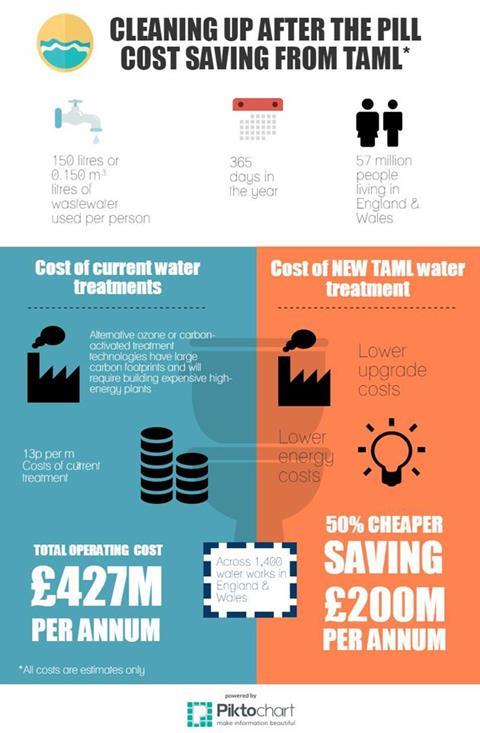 A family of iron-based catalysts could cut the cost of removing an endocrine disrupting synthetic oestrogen used in oral contraceptive pills from water supplies in half, according to a study by a team from Brunel University, UK, and Carnegie Mellon University, US.1 The oestrogen, 17a-ethinyl oestradiol (EE2), has become a headache for wastewater treatment facilities as it is expensive to remove and is known to feminise male fish even at concentrations in the low parts per trillion. The feminisation of male fish harms their reproductive success and ultimately leads to the collapse of fish populations.

Ozone and activated carbon can be used to remove EE2 yet both techniques have drawbacks, explains catalyst designer Terry Collins from Carnegie Mellon. For example, ozone water treatment also gives rise to toxic by-products, including epoxides and bromates, which need to be removed by further purification stages. Activated carbon, meanwhile, is formed by burning an organic source. Energy requirements, as well as capital and operating costs are ‘formidable barriers’ to widespread adoption of the two techniques, suggest the researchers.

In tests on UK municipal wastewater the TAML activators developed by Collins can degrade a wide range of micropollutants, including EE2. The catalysts are designed to be miniature replicas of peroxidase enzymes, which activate hydrogen peroxide to oxidise chemicals. In particular, the catalysts are also very good at breaking down phenol groups, such as those found in oestrogens, says Collins.

For wastewater to comply with proposed EU water quality standards, a Brunel team led by Susan Jobling has estimated that it would cost more than £30 billion to upgrade 1400 wastewater works in England and Wales using existing advanced end-of-pipe treatment. Rakesh Kanda from Brunel estimates that ozone removal of EE2 from wastewater would typically cost £0.13/m3 of water. ‘Comparing this with the TAML/hydrogen peroxide process, and assuming a dose of 10–20ppm peroxide is applied, cost savings compared to ozone of up to 50% can be achieved for most plants in the UK,’ he says.

As a green chemist, Collins has long taken a cautious approach to commercialising the patented catalysts, wishing first to ensure that they don’t themselves cause toxic effects. He has worked with endocrine disrupting experts who have screened for toxic effects and has also tested for developmental toxicity using zebrafish embryos at a facility run by Robert Tanguay at Oregon State University, US.2 The zebrafish assays on seven TAML catalysts suggested that four were ‘squeaky clean’, while the others, now abandoned, may cause adverse effects at high concentrations.

The teams from Brunel and Carnegie Mellon have now put two of these squeaky clean TAML peroxide activators to the test. First they showed that the catalysts efficiently degrade EE2 in pure lab water, municipal effluents and EE2-spiked urine at nanomolar concentrations. ‘These catalysts are chugging away, doing a very large number of turnovers, for five or six hours,’ says Collins. The lab-based tests suggest that 1kg of the more ‘aggressive’ catalyst would be sufficient to treat 200,000 tonnes of water. In complex real water systems, Collins thinks that that number may drop to 20–30,000 tonnes of water.

Plans for commercialisation of the TAML technology remain under wraps, although the team is ‘building a relationship’ with Swiss national labs to look at how the technology could be incorporated into wastewater treatment systems. With its waters protection act, Switzerland is taking a tough stance on micropollutants such as EE2 and plans are afoot to add an extra treatment stage to a large number of wastewater treatment plants, with implementation from 2016 until 2040.

Collins is always working to refine the catalysts, for example so that they work best at the optimal pH7, rather than pH8–10. The team is also adjusting variables to get the optimal catalyst and peroxide concentrations.

‘There is only one ozone but there are a lot of TAML catalysts, with more coming,’ says Collins. ‘We are in the process of an evolution in perfection of the technology that is already arguably at least as good as ozone and probably better.’

‘This research addresses a key problem for the wastewater treatment sector,’ comments Ian Walker, technical director at WRc, a research-based consultancy. ‘Current solutions are expensive to operate and costly to implement; the application of these novel catalysts offers real hope for a long term resolution of problem micro-pollutants.’