In this space special, we learn how to study comets surfaces, and speak to a Nobel Prize winner about his 20-year-old prediction proving to be correct

0.46 – Security experts are warning that the computers controlling machinery in chemical plants, power stations and other critical infrastructure are vulnerable to attacks from hackers, and that more work is needed to prevent control of critical equipment falling into the wrong hands. – Security experts warn chemical plants are vulnerable to cyber-attacks

3.31 – Chemists around the world are being called on to donate samples of novel compounds they have synthesised to a crowdsourcing project that aims to find new antibiotics. – Crowdsourcing compounds to tackle antibiotic resistance

5.20 – Geraint Morgan Tells us how the Philae probe was designed to land on a comet, why it didn’t and how scientists adapted to make the most out of its crash landing. – Made to measure

15.16 – Mimicking interstellar conditions, a team of scientists at NASA has synthesised complex organic molecules thought to be necessary for the origin of life. – Space-like conditions give rise to metabolic precursors 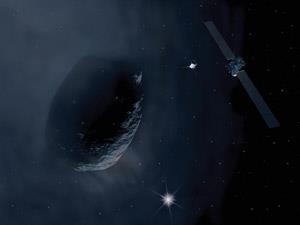 17.13 – Comets are thought to represent leftover building blocks of the solar system. Andrew Coates tells us what the early results form the Philae lander are telling us about the surfaces of comets. – More than dirty snowballs?

23.21 – A family of iron-based catalysts could cut the cost of removing an endocrine disrupting synthetic oestrogen used in oral contraceptive pills from water supplies in half, according to a study by a team from Brunel University, UK, and Carnegie Mellon University, US.1 The oestrogen, 17a-ethinyl oestradiol (EE2), has become a headache for wastewater treatment facilities as it is expensive to remove and is known to feminise male fish even at concentrations in the low parts per trillion. The feminisation of male fish harms their reproductive success and ultimately leads to the collapse of fish populations. – Pill endocrine disruptor cleaned up by catalyst

25.43 – Supposedly safe replacements for a harmful plasticiser have been found to positively correlate with both increased blood pressure and insulin resistance in children and adolescents.1 The scientists behind the study are now calling for regulatory changes to ensure that chemicals are tested for toxicity before they are put on the market. – Phthalate replacements linked to child health problems