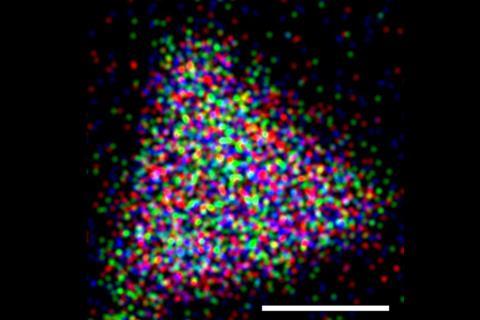 A method to reduce nitroarenes to amines – a key process in the chemical industry that normally requires extreme conditions and toxic reagents – has been demonstrated under ambient conditions using visible light. The process, which uses the earth-abundant plasmonic photocatalyst copper iron sulfide to supply hot electrons and holes, achieves a cost-normalised production rate about 10 times greater than the state of the art, and could therefore potentially play an important role in reducing the chemical industry’s carbon footprint.

The reduction of nitroaromatic chemicals to their corresponding amines is a key intermediate step in producing paints, polymers, agrochemicals and pharmaceuticals like paracetamol. However, the standard methods used today usually require temperatures of over 100˚C, noble metal catalysts and hydrogen gas at over 5MPa. Several groups have devised noble metal-free alternatives based on photocatalysis, but these have often suffered from long reaction times or poor selectivities or still required elevated temperatures and high-pressure hydrogen.

In the past decade, researchers have increasingly studied the surface plasmonic interaction, in which nanoparticles act as electromagnetic antennas to develop quantised electron density oscillations called plasmons. These decay femtoseconds later, either to photons or to high-energy electron–hole pairs. Radiative decay to photons gives colour to stained glass and enhances the signal in surface-enhanced Raman spectroscopy. Non-radiative electronic decay can dramatically speed up chemical reactions. Usually surface plasmonic interactions require metals – often precious metals such as gold. Recently, however, researchers have grown increasingly interested in the plasmonic properties of ternary chalcogenides, which are non-toxic and earth-abundant.

In the new work, researchers at RCPTM in the Czech Republic used chalcopyrite nanocrystals, which have a surface plasmon resonance similar to gold nanoparticles. However, as well as being much cheaper, they have better catalytic properties than gold as the radiative decay of the plasmons is suppressed, so more electron–hole pairs are produced. Moreover, the reactants are readily adsorbed onto the surface of the nanoparticles. The researchers found that, when they irradiated a solution of nitrobenzene and hydrazine containing chalcopyrite nanocrystals with blue light for two hours, the hydrazine reduced the nitrobenzene to aniline with 100% yield and selectivity. As a bonus, the heat produced by the plasmon decay increased the temperature from 25˚C to 58˚C, which also enhanced the reaction rate.

The researchers then studied the reaction for a variety of other nitroarenes, some of which contained competing functional groups. They found that, not only was their reaction successful, but that they often achieved much higher selectivity than previous processes, even for challenging reactants containing other reducible groups. For example, the highest selectivity previously achieved for 4-nitrobenzonitrile was 75%, while theirs achieved 99%. After use, the catalyst could be recovered and re-used. Overall, the researchers concluded, the catalyst’s cost-normalised rate for selectively reducing nitroarenes is an order of magnitude better than the current state of the art. 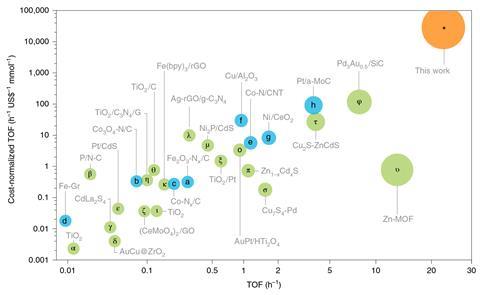 How the new plasmonic photocatalyst measures up against other state of the art catalysts for reducing nitroaromatics (turnover frequency; TOF)

The researchers could not be reached for comment, but Prashant Jain of the University of Illinois at Urbana-Champaign, US, is impressed by the catalyst’s applicability to a wide variety of different nitroarenes and reported dramatic improvement over existing catalysts. He sounds a note of caution, however. ‘Hydrazine does count as a toxic reagent: it’s basically rocket fuel,’ he says. ‘You’re already enhancing the reactivity by using such a strong reducing agent.’ Moreover, he adds, ‘One of the points made in the paper is that people often use hydrogen gas, whereas hydrazine can be obtained from ammonia. Well, to synthesise ammonia you require hydrogen… In a sense the hydrazine is just a high density source of hydrogen, so that’s something that will need to be studied in further work. You’re providing an external source of energy, so could that allow the process to be conducted with a milder reducing agent?’ He would also be interested to learn how much of this increase in reaction rate is truly photochemical and how much is photothermal, and whether plasmonic absorption is even needed to explain the results, given that chalcopyrite is a direct band gap semiconductor that strongly absorbs visible light and produces electron–hole pairs.