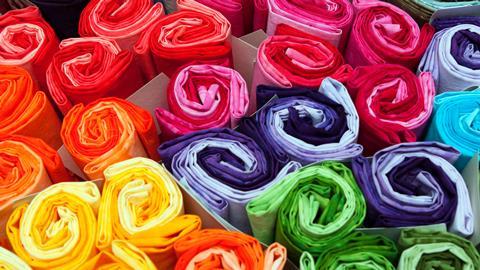 A new electrocatalytic method to produce anilines could offer a more environmentally sustainable way to make these commodity chemicals, widely used to make many products, including herbicides, drugs and dyes.

Aniline was first isolated from the plant-derived indigo pigment in 1826 by Otto Unverdorben. But it wasn’t until William Perkin serendipitously discovered the synthetic purple dye aniline mauve, or mauveine, which he made from coal-tar in 1856, that its commercial potential was realised, giving rise to the modern synthetic chemistry industry. 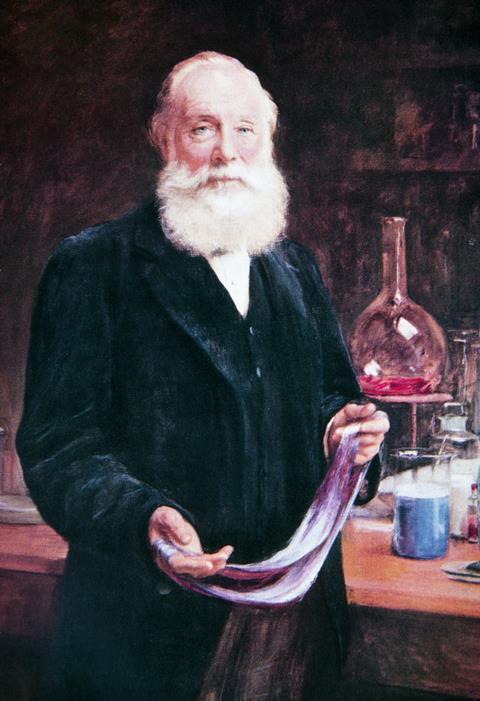 Nowadays, the manufacture of anilines to meet high global demand relies on reducing nitrobenzene with hydrogen derived from fossil fuels over a metal catalyst. The problem is that current processes are not environmentally friendly and not particularly selective.

‘Despite their near-ubiquity in the world, the main routes for aniline production still rely on rather clumsy chemistry – essentially cooking nitrobenzene precursors at high temperature under high pressures of hydrogen,’ says Mark Symes at the University of Glasgow, UK.

Now, Symes and his postgraduate student Athanasios Stergiou have developed a sustainable electrochemical approach that uses water as the source of protons and electrons needed to reduce nitrobenzene precursors. With no need for hydrogen gas, high temperatures or pressures, co-catalysts, single use reagents, and no toxic by-products, the team suggest it offers a promising, more sustainable route to anilines.

Previous efforts to harness electrochemistry for aniline production had been hampered by poor selectivity. But Symes and Stergiou have now shown that this problem boils down to the reduction of nitrobenzene directly at the electrode surface. To overcome this, the duo introduced a soluble redox mediator molecule that shuttles electrons and protons, thus enabling nitrobenzene reduction to occur away from the electrodes.

‘I was completely stunned when we first saw it work,’ says Symes. The conversion was so clean that I thought Athansios had mixed up his reaction mixture and the aniline standard that I told him to buy for comparison.’ 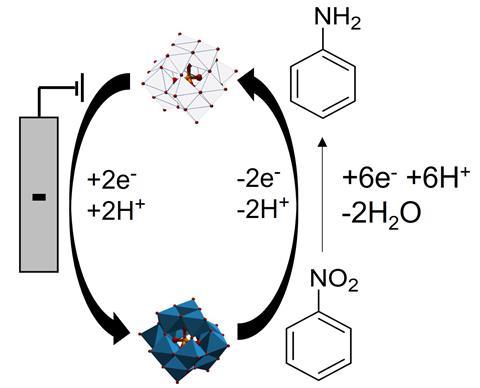 Symes says the main challenge was finding a suitable redox mediator that was soluble in water, stable over many cycles of oxidation and reduction, and quickly and reversibly donated electrons. Initial experiments showed that the polyoxometalate phosphotunstic acid was a promising candidate.

The researchers then made a two-chambered electrochemical cell, separated by a Nafion ionic membrane with an electrode on each side. One chamber was filled with an electrolyte solution containing dissolved phosphotunstic acid and a nitrobenzene substrate. The other chamber contained aqueous phosphoric acid.

When an electric potential was applied, the mediator took electrons from the cathode and diffused into the bulk solution. Here the mediator molecules encountered the nitrobenzene, transferring electrons to it and thus reducing it. The re-oxidised mediator then returned to the cathode to be reduced again.

‘In this way, a small amount of mediator can be cycled over and over again to reduce a much larger amount of nitrobenzene,’ explains Symes. ‘The electrons required for the reduction of the mediator are obtained from the counter electrode reaction in the electrochemical cell. In our case, this counter electrode reaction was oxidation of water.’ Using the approach, the team made various nitroarenes and aniline derivatives that were easily extracted and analysed using NMR.

‘The selectivity and efficiency offered by this redox mediated approach to aniline synthesis, not to mention the stark improvement in operational conditions compared to traditional methods, are quite remarkable,’ comments Kathryn Toghill, who investigates sustainable electrochemical technologies at the University of Lancaster, UK. ‘Water electrolysis to green hydrogen is all the rage at the moment, but this shows you can cut out the middleman and use electrochemistry for direct hydrogenation.’ 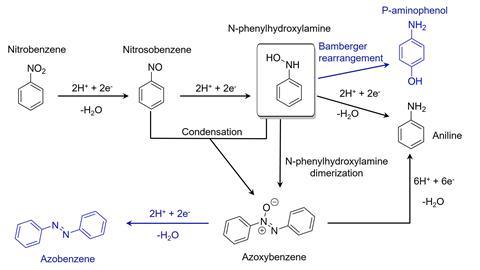 Proposed mechanism for the electrocatalytic reduction of nitrobenzene to aniline mediated by phosphotungstic acid. Blue arrows indicate pathways that have previously been identified, but were not observed in this study

However, Paolo Pescarmona who investigates green chemistry at the University of Groningen in the Netherlands, raises possible limitations in the context of sustainability and potential upscaling. ‘Future challenges may include tackling the current requirement of sodium hydroxide and of toxic and volatile chlorinated solvents for the separation of the anilines from the reaction mixture, and the reusability of the polyoxometalate acting as redox mediator.’

Nevertheless, Symes is confident their approach offers a viable alternative over existing routes. ‘We think the mild reaction conditions will be a game-changer for reducing highly functionalised nitrobenzenes to their aniline derivatives cleanly and selectively,’ he says. ‘We are hopeful that this process can be adapted to industrial systems in the near future.’