A novel polymer network that soaks into wood and provides artefacts with structural support while simultaneously protecting against biological degradation has been developed by scientists in the UK. The team say the polymer network could be a ‘one-stop’ material for tackling the main issues conservators face when treating and drying historical objects.

Large wooden artefacts such as the Mary Rose, Henry VIII’s famous flagship, are currently treated with a polyethylene glycol (PEG) spray to prevent the wood from shrinking as it dries out. PEG works by replacing the water held by cells within the wood, which have been hollowed out over the years by marine bacteria.

But sometimes the treatment itself can cause problems. ‘In high humidity conditions the PEG liquefies and so can seep from the wood,’ explains Zarah Walsh from the University of Cambridge. Over time the PEG may also degrade, producing formic acid. 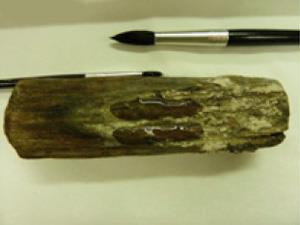 As an alternative to PEG, Walsh and her colleagues have developed a unique preservation material using natural waste products, which they successfully tested on small wooden specimens from the Mary Rose. The treatment contains the natural polymer chitosan, sourced from shrimp shells leftover from the seafood industry, and guar, derived from the plant, functionalised with a host molecule, cucurbit[8]uril, to form a cross-linked polymer network which can lock together and provide structural stability within damaged wood. This cross-linking is facilitated by the cucurbit[8]uril, which acts as a ‘molecular handcuff’, according to Walsh.

‘We have a second layer which is the same polymer chain but with a catechol, which is effectively a great iron chelator,’ Walsh adds. The presence of Fe(iii) ions from nails, bolts and gun batteries is another serious issue for the Mary Rose’s conservators, as they catalyse the production of sulfuric acid. The polymer network is able to adapt to the local iron concentration; if iron is present it can use it as a cross-linking agent, trapping it within the wood and producing a structurally stable material.

Yvonne Fors from the University of Gothenburg in Sweden, a project coordinator for the Swedish National Heritage Board, welcomes this development. ‘No one has presented a real solution […] but this [research] is actually coming up with a suggestion for something new,’ she tells Chemistry World.

Fors adds, however, that the conservative nature of the preservation community will dictate when this polymer-based technique is able to be used on large artefacts, such as the main hull of the Mary Rose, and for good reason. ‘[Conservators] deal with unique objects, so there can’t be any mistakes,’ she says. ‘They will have to be testing this a lot […] before it can come into use on a large scale.’