A new self-healing polymer that can repair holes far larger than any material before – more than 3cm wide – has been unveiled by US researchers. The polymer mimics biological healing by first rapidly forming a gel scaffold over the hole that is then sealed by another polymer, restoring most of the material’s strength.

They sound like science fiction, but self-healing polymers are a growing field in polymer chemistry. Potential applications range from prosthetic skin to more robust battery anodes, and various self-healing mechanisms have been developed. For example, Scott White’s group at the University of Illinois at Urbana-Champaign created a polymer containing capsules that crack open and release a healing agent. But while this method and others work well if the cut surfaces are in contact, they can’t repair a hole, as healing fluids simply drop out before they can solidify. 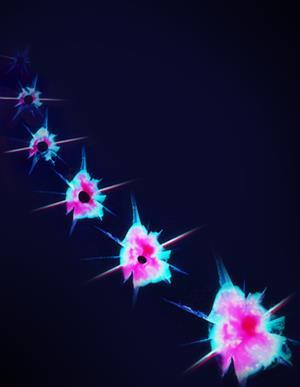 Now, White and colleagues solve this problem by embedding two channels into a polymer. They then put in either a polyethylene glycol or a tris [(4-formylphenoxy)methyl]ethane)) into each channel. The monomers of the repair polymer were also divided between two channels, while the polymerisation initiator was confined to one channel and the promoter to the other. They demonstrated the process using two different repair polymers – polyhydroxyethylmethacrylate and two liquid thiol-enes.

In the undamaged epoxy, the contents of each channel are kept separate, and both mixtures remain stable, low viscosity liquids. When a hole opens up in the polymer, both channels are ruptured and the liquids mix. Within seconds, the two gel components begin to set, with the gel stiffening as it spreads. ‘It’s like a little dynamic scaffold that’s able to support its own weight against gravity,’ explains co-author Nancy Sottos. ‘The normal types of healing agents that we’ve used in the past just wouldn’t be able to do that.’

Once this gel scaffold is in place, the two monomers in the other channel can combine and polymerise, sealing the hole tight and restoring the polymer to close to 62% of its original strength. Testing the seal with nitrogen gas at 345kPa, for hole diameters up to 6.3mm, they consistently found no leakage. Sealing was less consistent if they punched the hole in the polymer rather than cutting it, as the gel did not always penetrate all the radial cracks emanating from the impact site.

This design is only a proof of concept, as the polymer contained only two channels, and the fluids had to be pumped in artificially. The team now hope to design a polymer impregnated with a vascular network of microchannels containing pressurised healing fluids, allowing them to flow to an arbitrary impact site and seal the hole.

Thomas Russell of Umass Amherst in the US is impressed. ‘Here you have a hole, and all of a sudden the hole fills up and you’re done,’ he says. ‘That to me is very nice.’ He cautions, however, that the need for two separate reservoirs of pressurised liquids could be problematic in applications like body armour. Fred Wudl of the University of California, Santa Barbara in the US adds that the work could allow vital temporary repairs of polymers during operation. ‘An airplane’s flying and gets hit by a bird or something,’ he theorises. ‘If it can fix itself until a pilot can find a place to land, it can then be fixed permanently.’