Polymers designed to degrade upon exposure to gamma rays

Scientists in China have designed and developed a series of epoxy thermoset resins containing gamma ray-responsive bonds. The new polymers, which have mechanical and thermal properties comparable with those of commodity epoxy resins, degrade in a controlled manner on exposure to gamma irradiation. 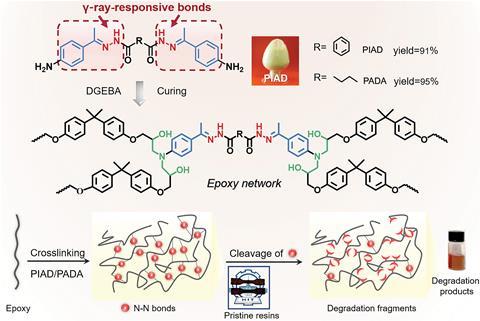 The epoxy thermosets are designed to preferentially degrade upon exposure to gamma irradiation, whilst avoiding uncontrollable recombination and crosslinking processes

Aiming to take control of thermoset degradation, Ningdi Xu and colleagues at the Harbin Institute of Technology and the Technical Physics Institute of Heilongjiang Academy of Sciences, designed epoxy thermosets with phenyl imine conjugated bonds that are sensitive to gamma radiation. Preparing the epoxy thermosets involved curing a commercial bisphenol A epoxy with curing agents synthesised from p-aminoacetophenone and dihydrazide. ‘The gamma ray-sensitive behaviour can be attributed to the preferential cleavage of the conjugated phenyl imine bonds in gamma ray irradiation,’ explains Xu. ‘The key issue for facilitating this degradation process is reducing uncontrolled recombination and crosslinking. The adjacent position of the N–N bond introduces a stable conjugated structure, which can stabilise active free radicals generated after gamma ray irradiation, making it difficult for the polymers to recombine and crosslink.’

The team has developed ‘a novel class of gamma ray-responsive epoxy thermosets with high thermal and solvent robustness, and an impressive mechanical performance including a Young’s modulus as high as ∼2.7GPa, yet they degrade under controlled γ-ray irradiation,’ comments Andreia Sousa, a sustainable polymers researcher at the University of Aveiro in Portugal. ‘These are quite good prospects for their recycling, and in that regard also to solve a real word challenge – polymer waste accumulation.’

Likewise, Sahar Al-Malaika, a polymer scientist at Aston University, UK, says the work presents ‘a convincing laboratory-based scientific case to a new approach for addressing the thorny issues of polymer waste and recycling of thermosets’. However, Al-Malaika also raises some potential challenges with scaling up the process: ‘Of particular importance are the inherent risks and hazardous issues in large-scale operations and the inadvertent production of collateral waste in terms of disposal – [particularly] organic solvents and radioactive waste.’

Xu concludes that ‘it is achievable to apply gamma ray-responsive conjugated phenyl imine bonds into the design of various other thermosetting materials and it would be expected that a range of robust and stable thermosetting resin composites can be fabricated with the potential for industrial applications, ultimately promoting the sustainable development of composite materials.’