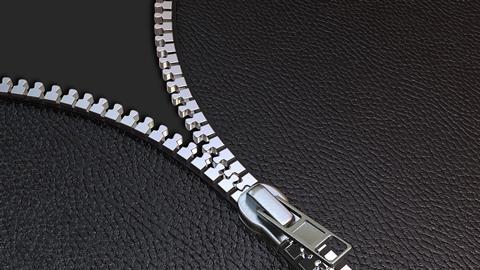 Catalyst-free strategy allows Raft polymers to be unzipped for recycling

A simple way to reverse a popular controlled radical polymerisation method has been developed by making use of specific end groups produced during the process. The new approach allowed the researchers to regenerate the starting monomers from linear and bulky polymers, reaching conversions of up to 92% without a catalyst.

Controlled radical polymerisation techniques can be used to make polymers with narrow molar mass distributions and well-defined structures, but their high costs have limited commercialisation of these materials. ‘We believe we have taken a significant step towards bypassing this hurdle,’ says Athina Anastasaki from ETH Zurich. ‘Our approach takes advantage of the very active end groups installed by reversible addition-fragmentation chain-transfer (Raft) polymerisation.’

The researchers dissolved different polymers in an organic solvent and heated the mixtures to 120°C for several hours. ‘In this way, the Raft end groups are cleaved, which leads to quick unzipping of the polymers back to the starting materials,’ explains Anastasaki. She adds that while the exact mechanism hasn’t been uncovered, preliminary data suggest that the process takes place through a radical pathway. ‘By cleaving the Raft group, a radical is formed at the end of each polymer chain.’ Anastasaki and her colleagues used NMR spectroscopy and size-exclusion chromatography to monitor the conversion. They also showed that the recovered monomers could be reused to make new products. 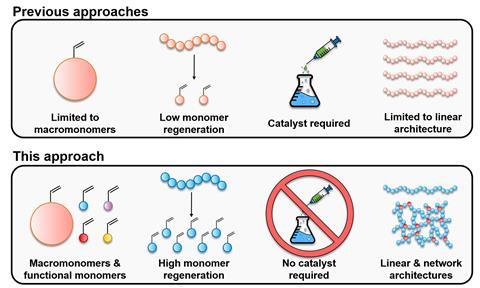 ‘The researchers demonstrated the feasibility of this approach for various polymethacrylates, including the commercially important Plexiglas,’ notes Krzysztof Matyjaszewski from Carnegie Mellon University in the US. ‘Polymethacrylates and other polymers made from vinyl monomers contain long, stable carbon-based backbones which usually cannot be degraded in a simple way.’

Christopher Barner-Kowollik, an Australian Research Council Laureate Fellow at Queensland University of Technology who wasn’t involved in the study, mentions that there are very few reports on reversing controlled radical polymerisation. ‘Previous methods either required a catalyst or involved very low depolymerisation conversions and side reactions, disallowing the full recovery of the starting materials. The approach developed by Anastasaki’s team doesn’t need a catalyst and can proceed to very high depolymerisation yields,’ he says.

‘Reversing controlled radical polymerisation is important because it opens a new avenue for degrading polymers while retaining the agent used for the controlled polymerisation,’ comments William Gramlich at the University of Maine in the US. He points out that common recycling methods like pyrolysis usually damage the agent at the chain end.

Anastasaki adds that being able to retrieve the monomer building blocks not only allows chemists to remake the original polymers but also to create completely new ones that can be used in other applications. ‘This could encourage the further industrial commercialisation of Raft polymerisation,’ she says.

But the reaction currently takes place at very low concentrations and requires a large amount of solvent. ‘A remaining challenge that we’re trying to address is to minimise the use of solvent and engineer the process to achieve depolymerisation in a more scalable manner,’ says Anastasaki. ‘We have somewhat addressed this by recovering the solvent in high purity – up to 99% – after a depolymerisation reaction, but we’re investigating further approaches.’ The scientists are also working to expand their method to other types of polymers like polystyrene.