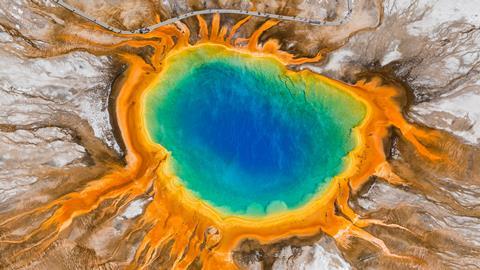 By heating water far above its boiling point inside a closed flask, scientists can use it instead of an organic solvent to prepare a covalent organic framework (COF) material – a method they dubbed geomimetic hydrothermal synthesis because it recreates some of the extreme conditions deep under the Earth’s crust.

Now, researchers replaced the organic solvents usually used for making polyimide-based COFs with water. ‘Organic solvents require special handling and treatment for waste disposal after use,’ explains Byeong-Su Kim from Yonsei University in South Korea, who led the study. Water, on the other hand, doesn’t have these disadvantages. But water isn’t usually an appropriate solvent because most organic compounds are not readily soluble in it. 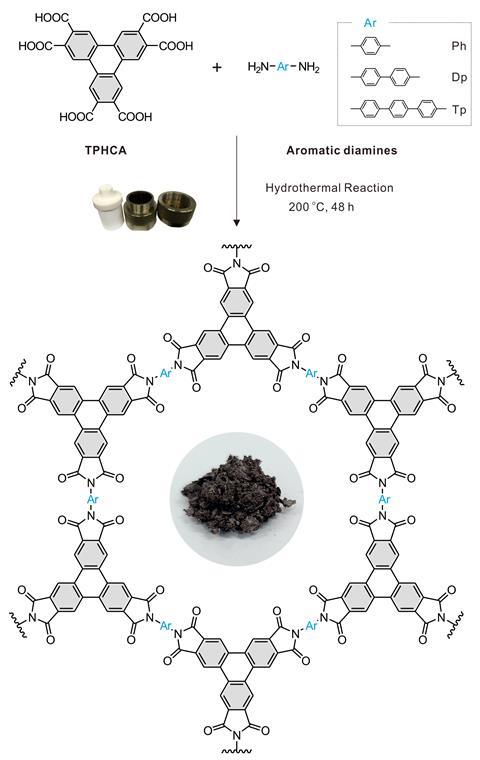 Kim’s team was inspired by the fact that many interesting chemical reactions – including synthesis of highly crystalline minerals – can happen deep inside the Earth, so they decided to recreate some of these conditions. ‘We found that the dielectric constant and the ionic product of water became similar to those of organic solvents under hydrothermal conditions,’ explains Kim. This is because the hydrogen-bonded water network starts breaking down under extreme conditions.

After heating a solution containing the two precursors – a carboxylic acid and a diamine – to 200°C for two days in a sealed container, they obtained several solid polyimide-based COFs. Testing the resulting material as an active anode in batteries, Kim’s team found that compared with the graphite anodes used in standard lithium-ion batteries, the polyimide COF has twice the capacity and can be reliably recharged 200 times. The increased capacity is due to COF’s high surface area, which enhances ion transport.

However, Rubén Mas Ballesté from the Autonomous University of Madrid, Spain, who works with COF synthesis isn’t enthusiastic. He explains that what limits COF production is the availability of building blocks rather than the synthesis procedure. Therefore, applying the study’s findings on an industrial scale would still be costly. Ballesté also says that water has already been reported for making other COFs under lower temperatures and the imide formation is known for COF preparation.

Kim and his team now want to explore other water-soluble precursors to create new COF structures.