Scientists have loaded an edible covalent organic framework (COF) with insulin and shown that it can sustainably reduce the blood glucose levels of diabetic rats. While there is still some way to go before the system could be used clinically, Ali Trabolsi of New York University Abu Dhabi, who led the work, is confident their system ‘will dramatically improve the well-being of diabetic patients worldwide in a very simple and straightforward way’ – by replacing multiple daily injections with pills.

The COF was synthesised by co-condensing 2,6-diformylpyridine and 4,4’,4’’-(1,3,5-triazine-2,4,6-triyl)trianiline in anhydrous 1,4-dioxane in the presence of acetic acid at room temperature for 10 minutes

Although there have been some FDA-approved oral insulin systems, Trabolsi notes that these have various drawbacks, such as instability in the stomach or toxicity with long term use. ‘The system we have engineered is highly stable in the stomach, specific and glucose-responsive, and therefore represents a step forward in the future of insulin oral delivery and the treatment of type 1 diabetes.’

Central to the system is an imine-linked COF that can be made in just 10 minutes from two inexpensive building blocks – 2,6-diformylpyridine and 4,4’,4’’-(1,3,5-triazine-2,4,6-triyl)trianiline – at room temperature. The framework contains crystalline nanosheets, with hexagonal pores, which stack on top of each other to create nanoparticles. This means the COF has both hexagonal microporous channels and larger spaces between the nanosheets.

Insulin molecules, which are too large for the micropores, are loaded into the bigger gaps between the nanosheets. Once the insulin-loaded material is ingested, it can cross the intestinal barrier into the bloodstream where blood glucose starts filling the smaller porous channels. In a hyperglycaemic state, when glucose levels in the blood are too high, glucose fills up all of these pores. And when even more glucose penetrates the spaces between the nanosheets, it displaces the insulin, which gets to work bringing glucose levels back to normal. 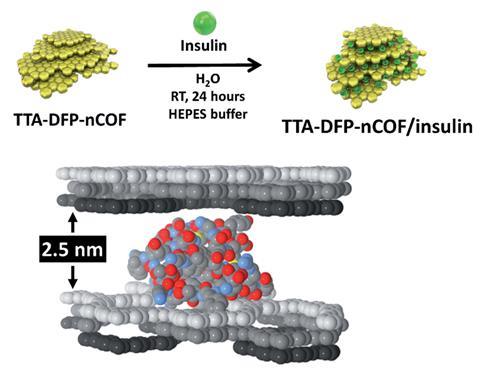 Insulin sits in between layers of the COF nanosheets, rather than in the porous channels

The team tested the system in diabetic rats, and showed that the insulin-loaded COF could successfully cross the intestinal barrier, release insulin and reduce the blood glucose level, with the COF protecting the insulin from breaking down in the digestive tract until it crosses into the bloodstream.

Yanli Zhao, an expert in biocompatible nanoparticles and porous materials at Nanyang Technological University, Singapore, says this is a real improvement over existing methods. ‘The question is how to deliver and protect the insulin activity, while avoiding damage from the acidic stomach conditions – it’s quite a breakthrough.’ In terms of toxicity, Zhao also notes that the nature of the material is encouraging: ‘My expectation is that because this COF is purely organic with no metals, I don’t think it is likely that this would have long term accumulation in the body, so I think it is quite promising.’