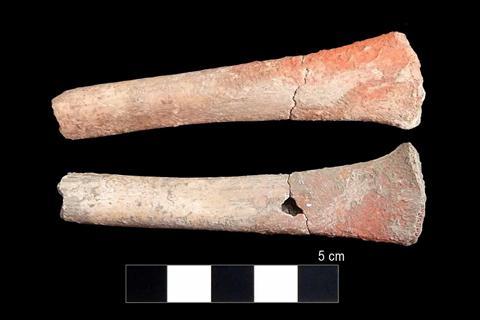 Human radius recovered from one of the Iberian tombs. The bones’ surfaces are stained with cinnabar that is thought to be the result of a burial rite

Traces of the earliest-known cases of mercury poisoning, dating back almost 5000 years, have been discovered in ancient tombs in Spain and Portugal. They’re thought to have been caused by the extensive use of cinnabar – mercury sulfide – as a bright red pigment in prehistoric times.

Analysis of human bones from more than 50 tombs across the Iberian peninsula revealed very high levels of mercury poisoning in people buried during the Copper Age, between about 2900BC and 2600BC.1 At this time, cinnabar had great cultural value for painting, to decorate figurines and stelae, and in burials to give the dead the appearance of life.

Cinnabar was especially widely used in prehistoric Iberia; the world’s largest cinnabar mines are at Almadén in what’s now central Spain, and archaeological research shows its exploitation began about 7000 years ago.

The high mercury levels shocked the study’s lead author, paleontologist Steven Emslie of the University of North Carolina, Wilmington, who was hoping to learn more about the region’s prehistoric diets. ‘I was looking for variations in mercury levels, and expecting them to be very low,’ Emslie says. ‘But this was just way outside what I expected.’

Emslie and his colleagues discovered that the bones of almost a third of 370 individuals found in ancient tombs had much higher levels of mercury than would be expected from eating fish, for example, which tend to accumulate mercury found naturally in the environment. ‘If you eat a lot of tuna or long-lived fish, you might have 5 parts per million of mercury in your hair,’ he says. ‘But we were getting hundreds of parts per million in the bones.’ 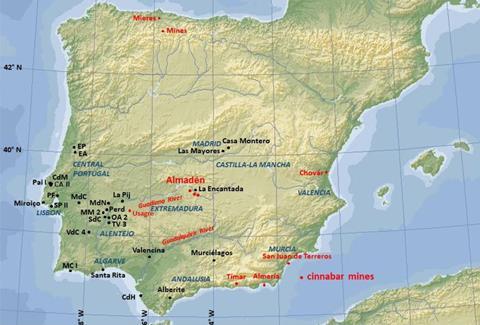 The heightened mercury levels were found in the humerus bones of the buried skeletons, which may be the result of prolonged exposure to cinnabar, possibly in skin paints – and the new study shows the bones of at least two individuals had a mercury isotope signature that matched the Almadén mines, ‘so it definitely was coming from there’, he says.

While most of the affected bones had mercury levels of between 10 and 50ppm – much higher than the safe level of up to 2ppm in human hair suggested by the World Health Organization – a few showed extraordinarily high levels of up to 400ppm. In these cases, Emslie does not rule out the possibility that those individuals deliberately consumed cinnabar powder, either by inhaling its vapours or eating it.

‘We don’t know for sure, but that would make sense with these burial rituals,’ he says. ‘That could have given them temporary exposure, and then they would have recovered and done it again … so that’s how you might get a gradual accumulation without actually killing the person.’

But Kaare Lund Rasmussen of the University of Southern Denmark, who was not involved in the study, says that the very highest levels of mercury – those above 300ppm – would have been fatal. In those cases, he says the mercury must have seeped into the bones after death, when the individuals were covered with cinnabar during burials – a possibility that Emslie is doing further research on, although a 2019 study led by him suggests is unlikely.2

Rasmussen’s own research includes studying the use of mercury-based medicines as a medieval treatment in parts of Europe for leprosy and syphilis.3 ‘Here the bone concentrations were much more modest – 0.01 to 1 parts per million – and so people could sometimes survive this treatment,’ he says.