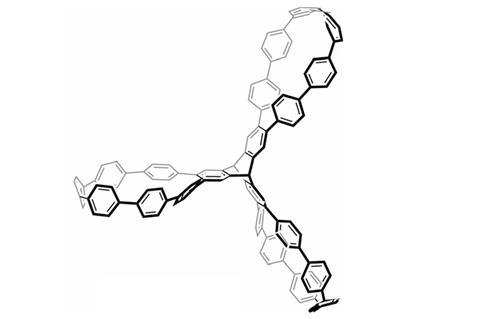 A symmetrical carbon-rich ‘nanopropeller’ that could find applications in materials science has been made by chemists in the US. The triple helix structure consists of three identical nanohoops anchored to a central triptycene skeleton.1

Nanohoops are members of the family of sp2-hybridised carbon derivatives that includes graphene, fullerene and carbon nanotubes. Since they were synthesised for the first time in 2008,2 nanohoops have attracted attention because of their unique structural, optoelectronic and energetic properties.

The three-blade molecular propeller, designed by Ramesh Jasti’s group at the University of Oregon, US, was synthesised using palladium catalysed coupling reactions and subsequent reductive aromatisation. The result is not only an aesthetically pleasing structure on paper, but a striking yellow crystalline product in the flask.

The nanopropeller has a trigonal (C3h) symmetry that makes its proton NMR spectrum simple, with just eight peaks. Its crystal structure is equally straightforward: molecules organise into layers of repetitive cyclic trimers that pile on top of each other forming hexagonal channels with a diameter of 11 Å.

The researchers also explored the propeller’s capabilities as a host for other molecules. They calculated that the crystalline packing leaves almost half its volume accessible, indicating great potential as a novel porous material.