Micronutrient deficiencies, which affect over 2 billion people worldwide, could be detected much more simply and cheaply thanks to US researchers who have developed a zinc biosensor that functions as a bacterial ‘litmus test’, eliminating the need for expensive equipment. The biosensor uses engineered bacteria to produce different colours in response to zinc levels.

Although there are similar biosensors that have used proteins to detect zinc or other heavy metals, most rely on bioluminescent or fluorescent outputs which require additional equipment to read. Now, a team led by Mark Styczynski at the Georgia Institute of Technology say they have made the first zinc biosensor that can be read using just the naked eye.

The biosensor isn't as fast or precise as what can be achieved in the lab, but it could be the next best thing when resources are limited, in disaster zones for example. 'In principle, we would just need a blood sample and an improvised centrifuge – an egg beater and some plastic tubing – and we could get on-site results,' explains Styczynski. 'This would be in contrast to requiring expensive equipment, or the current standard approach which is to ship samples thousands of miles away to an analytical laboratory for measurement.'

The biosensor is based on modified Escherichia coli, which naturally responds to the level of zinc in its environment. Using metabolic engineering techniques the researchers inserted pigment-producing genes from other organisms into E. coli and tuned its genetic machinery to trigger the production of orange, red and purple pigments in response to normal, borderline and low levels of zinc, respectively. 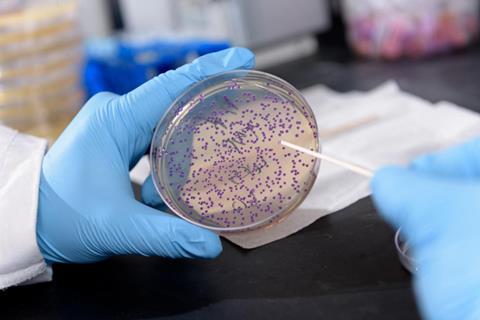 Although not yet tested on human blood samples, Styczynki is confident that the biosensor could form the basis of a blood test in future. 'What we envision is a patient has blood drawn, that blood is “centrifuged” to separate red blood cells from the serum, and the serum is then incubated with our biosensor cells,' he says. Those cells would respond to zinc levels in the sample and give a readable colour output in 24 hours.

'This could offer a simple, inexpensive assay,' says Baojun Wang, who investigates synthetic biology at the University of Edinburgh, UK. 'However, the study did not test the developed sensors using blood samples so it is hard to say how they are going to work in real situations. Definitely further tuning is needed for future real world applications.'

Styczynski agrees, suggesting that the biosensor's circuit would likely need re-tuning to change colours at the appropriate zinc levels in patient serum compared to the lab mixtures his team used. They are also working on ways to reduce the 24-hour wait time.