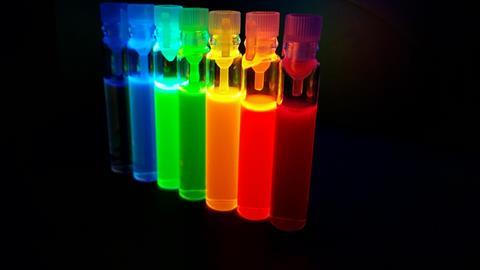 Quantum dots and a bright future

Tune in to the amazing semiconductors giving colour to your TV

What are quantum dots?

Quantum dots are semiconducting crystals just a few nanometres wide. They are typically made from combinations of transition metals and/or metalloids, just like regular semiconductors. Cadmium selenide and cadmium telluride are probably the most prominent compounds used in quantum dots.

As they are so small, a quantum dot’s excitons (a type of quasiparticle, where an excited electron combines with the positive hole it leaves behind) experience quantum confinement in all three spatial dimensions. Changing the size of a quantum dot changes its properties, in particular its fluorescence, meaning that they can be tuned to different colours. The smaller the nanoparticle, the narrower its photoluminescence wavelength; smaller dots emit blue light while larger ones emit red light.

These properties mean quantum dots are useful for biosensors and intracellular or in vivo imaging, or in chemiluminescence reactions as a catalyst or a light-emitter. Scientists are also experimenting with them in solar cells. Outside the lab, quantum dots are appearing in the next generation of TVs.

Alexey Ekimov, a solid-state physicist working at the Vavilov State Optical Institute in Russia, first observed what we now know as quantum dots in 1981 while experimenting with semiconductor-doped glasses. Together with his colleague Alexander Efros, a theoretician at the same institute, they linked the size of the semiconductor crystals to their optical properties. A few years later, Louis Brust, a US chemist studying colloidal semiconductor nanocrystals at AT&T Bell Laboratories, noticed how conductivity changed when he altered the size of the crystals he testing. However, the term as quantum dots only entered our vocabulary in 1988, when physicist Mark Reed, who is credited with making the first quantum dot device, coined it when he worked at Texas Instruments.

Why put quantum dots in TVs?

Quantum dots can be tuned to emit light with a particular wavelength so quantum dot displays promise to cover a much wider colour gamut than regular light-emitting diode (LED) ones.

Classic liquid crystal display (LCD) TVs use LEDs to produce a white backlight and coloured filters adjust and mix that light as appropriate. However, the white LEDs in your TV aren’t pure white – they’re blue LEDs coated with a yellow phosphor. This means red on your TV appears dimmer than green and blue, which has a knock-on effect on all the other colours your TV tries to make.

In a quantum dot TV, pure blue LEDs work with red and green quantum dots to create pure white light. This white light then goes through regular colour filters in the LCD screen and the resulting pictures have brighter and more accurate colours. Manufacturers like the concept because it’s just a tweak to how regular LCD TVs are made at the moment.

Why not use quantum dots to make all of the colours?

Scientists are still perfecting quantum dots that emit blue light. The problem is, for blue emission, you need quantum dots less than 3nm wide. They’re harder to make than the slightly larger ones, especially if you can’t use cadmium.

Why can’t you use cadmium?

Cadmium-based quantum dots are archetypal. Cadmium, however, is toxic and an increasing number of countries, including the EU and Japan, have banned companies from using it in consumer products.

Until 2014, quantum dot-enabled displays were exempt from EU regulation on cadmium in consumer products under the Restriction of Hazardous Substances (RoHS) and Registration, Evaluation, Authorisation and Restriction of Chemical substances (Reach) guidelines. However, the EU parliament has since restricted the use of cadmium-based quantum dots and asked the European Commission to reassess them.

Cadmium-free quantum dots that work in television screens are available – for example, indium phosphide can be used. However, the jury is still out over whether they are an environmentally sustainable alternative.

How do you make quantum dots?

There are a number of ways to make quantum dots including colloidal synthesis, electron-beam lithography and molecular beam epitaxy. Scientists have also made carbon quantum dots out of urine.

Yes. In 2015, scientists in the US devised a one-step synthetic route to recycle urine into carbon quantum dots and used them as fluorescent probes for detecting metal ions. Generating carbon dots from a liquid source rather than solid materials is more efficient as several processing steps can be bypassed.