Scientists have developed a quick, cheap, safe and field-deployable method to detect the Ebola virus in unprocessed whole blood. 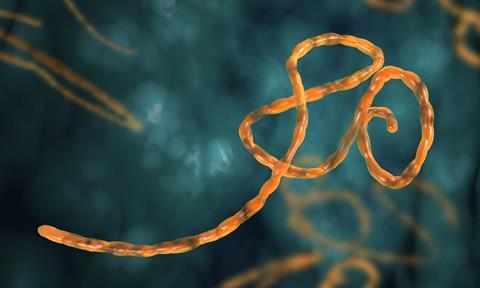 The recent Ebola epidemic in West Africa was responsible for 11,310 deaths. Containing this deadly virus relies on rapid, reliable diagnoses, but Ebola is difficult to diagnose because it shares its initial symptoms with other diseases such as malaria and yellow fever. It usually takes weeks before patients develop the bleeding associated with Ebola haemorrhagic fever; by this time, they may have passed the infection on to others.

The standard method of detection is reverse transcription polymerase chain reaction (RT-qPCR), where chemical probes flag nucleic acids in the virus genome. This is reliable but involves deploying whole mobile laboratories and trained personnel. It is also expensive and results can take hours or even days, while the virus continues to spread. Another drawback is that it requires a blood draw, which is risky for both medical personnel and haemorrhagic patients.

Now, an international research team, led by Sterghios Moschos at Northumbria University, UK, has simplified the process. They developed a prototype called the Quantitatively Rapidly Identify (QuRapID) device, which can freeze and thaw a pinprick of blood – 700 times less blood than RT-qPCR – to break down cell membranes and release viral genetic material. They then modified the chemical probes used in RT-qPCR by replacing the commonly used green fluorophore with a red one, so the probes emit red light in the presence of the genetic material from the virus. The original probes wouldn’t work because blood absorbs green light, but it emits red light. Controlled by a Raspberry Pi, the device measures emission from the red probe to test for the presence and quantity of the Ebola virus – the latter value indicates the severity of infection. 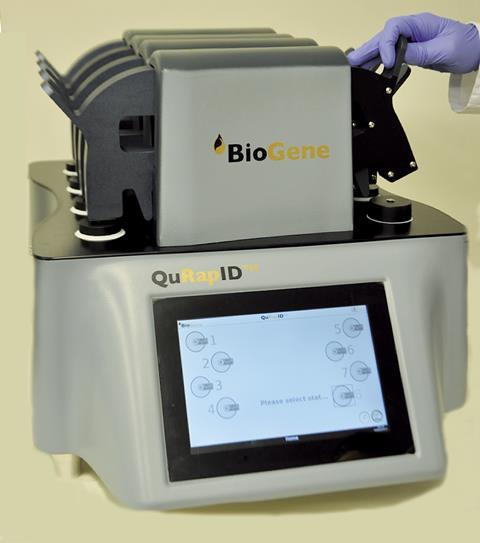 ‘There have been many efforts to take nucleic acid amplification-based diagnostics from the lab bench to the field,’ explains Moschos. ‘What makes this solution different, in my opinion, is how someone with practically no healthcare, chemistry or biology training can reliably and safely carry out the procedure in the field.’ Indeed, powered by a car battery or mains electricity, the QuRapID device weighs only 20kg, requiring no expensive equipment and minimal training. It can test eight samples in parallel at a cost of £9.40 each, providing results at the point of care in just over an hour. A sealed disposable sample holder contains the minute blood sample, minimising the risk of exposure. The team have tested the system’s ease of use in full personal protective equipment and even developed a standard operating procedure for use in the field.

‘The requirement of just 5µl of blood and the ability to use at point-of-need are promising,’ comments Sambashiva Banala, an expert specialising in developing chemical probes for biological applications at Howard Hughes Medical Institute, US. ‘The system has great potential to be adapted for the detection of other infectious viruses,’ he adds.

Moschos agrees that they can apply the principle to any virus, such as Middle East respiratory syndrome (Mers) or Zika, by tweaking the chemistry.