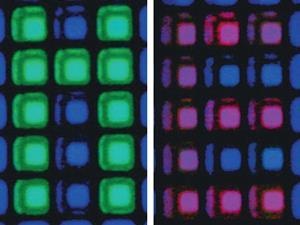 Early detection is key to slowing outbreaks of Ebola, such as the one currently spreading across west Africa that is estimated to have infected almost 1000 people, according to the latest World Health Organization report. A molecular computer could one day simplify analysis of biomedical assays like those used to diagnose Ebola, researchers say. And a new prototype device can display a fluorescent letter in the presence of nucleic acid sequences from the Ebola virus or the closely-related Marburg virus: ‘E’ for Ebola or ‘M’ for Marburg.­1

One way to identify microbes is a microarray containing strands of nucleic acids complementary to DNA or RNA in different viruses. For these tests, doctors isolate and amplify viral nucleic acid in samples from an infected patient. Nucleic acids in the purified sample bind to those on the array, producing a signal – typically a fluorescent molecule. A pattern of fluorescent spots appears on the array, and a computer then interprets the pattern to identify the virus in the sample.

Assays using molecular computers, however, could simplify biomedical diagnostics. This approach combines the molecular recognition that occurs on the surface of a microarray and the pattern recognition traditionally done by an electronic computer into a single step. Molecular computers are programmed with sets of DNA, RNA or protein logic gates that interact with multiple molecular inputs to generate one output.

One type of logic gate uses deoxy-ribozymes, or DNAzymes, to convert a DNA input into a fluorescently labeled-DNA output. When an input nucleic acid binds to a single-stranded closed loop on the DNAzyme, it triggers one end of the loop to separate from the stem of the DNAzyme. A strand of DNA, called the substrate, binds to the stem, and the DNAzyme snips the substrate. One product of that cleavage is a short strand of DNA containing a fluorescent dye. The dye now lights up because it is separated from a quencher on the other end of the substrate.

Researchers can design the DNAzyme structure so that inputs deactivate the gate, while other DNAzyme logic gates require combinations of inputs. Scientists link different types of molecular logic gates into circuits that perform calculations based on molecular inputs.

In 2006, Joanne Macdonald, then at Columbia University, US, and her colleagues created a molecular computer that uses 32 DNA molecules and 128 DNAzyme-logic gates to calculate the next move in a game of tic-tac-toe against a human opponent.2 Another circuit of 12 DNA-based logic gates calculates the square root of a four bit binary number using eight inputs.3 And molecular computers can also work inside cells. One circuit senses levels of five different microRNAs, and if the levels match those typically found in human cervical cancer cells, the circuit produces a protein that kills the cell.4

Now, Macdonald, at University of the Sunshine Coast in Australia, and her colleagues wondered if it was possible to link DNAzyme logic gates into circuits that generated a visible display of numbers or letters.

Her team designed logic gates to respond to 15-nucleotide segments of DNA from the genomes of two filoviruses, Ebola and Marburg. The presence of the sequence unique to the Marburg virus triggered one DNAzyme gate to cleave a substrate strand containing a green fluorescent dye. 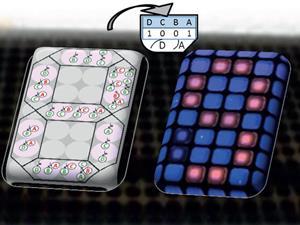 Digital displays can be created that respond to specific DNA sequences

The four strains of the Ebola virus, however, are so varied that they do not share a 15-nucleotide sequence. That meant that detecting Ebola required a slightly more complicated DNAzyme gate. The researchers engineered a DNAzyme with two loops: one to detect to detect the Marburg sequence, and another to detect a sequence common to all filoviruses, which includes Marburg and all strains of Ebola. This gate is activated only when the filovirus sequence is present, but the Marburg sequence is not; activation cleaves a substrate strand labelled with a pink fluorescent dye.

Next, the researchers used a circuit design program to arrange the two logic gates in each of 15 wells of a 384-well plate. They wanted the arrangement to generate a green ‘M’ in response to the Marburg input. Adding the filovirus sequence without the Marburg sequence would generate a pink ‘E’ in the wells. After incubating the wells overnight with either input sequence, the researchers visualised the corresponding letter output using a UV light box.

Macdonald says her team is now testing the DNAzyme gates with samples of viral genomes instead of synthesised sequences.

In another experiment, the researchers built a molecular computer that generated a seven-segment display like those that create the numbers on digital clocks. They encoded the numbers one through nine using various combinations of four DNA inputs. Then they created a molecular circuit so that appropriate segments of the display lit up when the inputs for a particular number were added to the wells.

This proof-of-principle work hints at the possibility of doing away with computers to read diagnostic assays in the future, says Milan Stojanovic of Columbia University. He was Macdonald’s postdoctoral advisor from 2004–2012, but was not involved with the current work. He’s excited to see a clear readout for a process that would otherwise require decoding a complex pattern on a microarray, and he thinks the idea of simple alphanumeric display could be applied to other types of molecular logic as well.