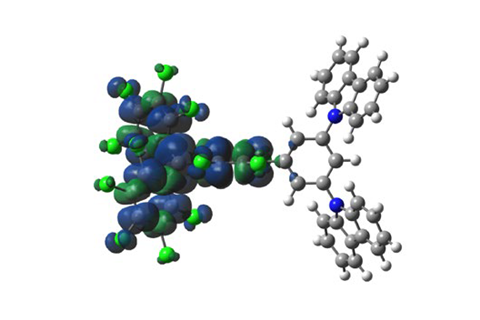 An international team of researchers has developed a new kind of organic light-emitting-diode (OLED) based on organic radicals that violate the aufbau principle,1 which states that electrons fill up atomic orbitals from lowest to highest energy. The discovery could enable the manufacture of OLEDs that stay brighter for longer.

OLEDs are the prime candidate for the next generation of displays, offering flexible designs, lower power consumption and better contrast. Costs are high, however; typical prices for a commercial OLED television start at around £1000. To lower prices, scientists need to decrease manufacturing costs and increase efficiency.

One way to do this is to use materials based purely on organic radicals. By avoiding what are known as ‘dark’ triplet spin states – where excited electrons are spin-forbidden from emitting light through phosphorescence – the unpaired electron of the radical breaks through the efficiency limits of traditional OLEDs. On top of that, by allowing manufacturers to forgo the expensive iridium used to boost today’s OLEDs, radical-based technology could help keep costs down. 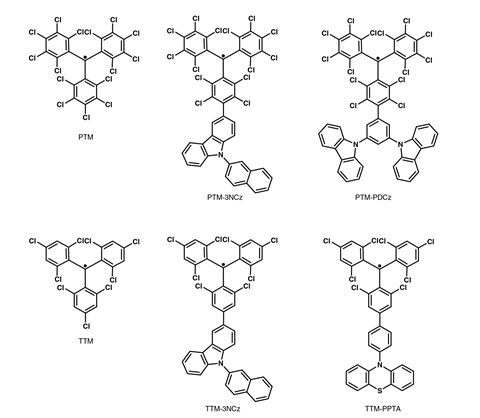 Chemical structures of some of the radicals studied

However, there are a limited number of luminescent radicals which are stable enough to isolate. ‘The challenge was that we didn’t really have any good design rules’, says Emrys Evans from the University of Cambridge. Last year, he and his team made progress in this area by designing a purely organic OLED using a radical which emitted red and near infra-red light with the best efficiency to date.2 Now, the international team has taken their discovery a step further after researchers at Jilin University in China created a new set of light-emitting radicals. By developing a design strategy to make light-emitting radicals which disobey the aufbau principle, the team was able to improve the fluorescence half-lives by up to four orders of magnitude – meaning the OLEDs will stay brighter for much longer.

‘If you have a very electron-rich donor group and a very electron-deficient radical, you can get into this situation where the radical orbital can sit lower in energy than another doubly filled orbital,’ explains Evans. ‘This non-aufbau behaviour gives us some stability which maybe we can use…to disrupt future organic electronics.’

Evans says the team’s next short-term goal is to perfect a pure red radical emitter – critical for a typical red-green-blue display.

‘[This approach] looks like a promising new route for making OLEDs,’ says Gert-Jan Wetzelaer, a researcher at the Max Planck Institute for Polymer Research in Germany who was not involved in the research. ‘This is quite new, and potentially there could be more chemical structures designed to get green and blue emission.’

Correction: The article was updated on 15 August 2019 to clarify responsibility for the reported work