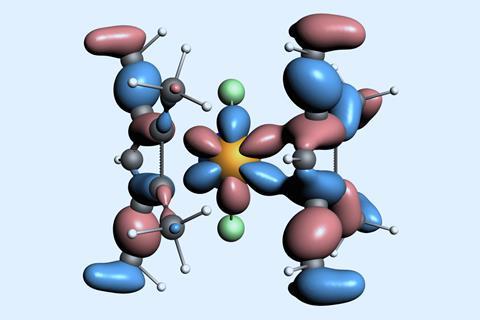 Researchers from the US and China have made a rare californium sandwich compound. Working with a limited supply of the radioactive element, the group managed to obtain a crystal structure of a californium metallocene – revealing new insight into the chemistry of the heavy actinides.

Californium is a synthetic element that can only be prepared at milligram scales. It was first made in 1950. An organometallic complex of the element was partially characterised 20 years later. Due to the difficulty and high costs associated with making and handling the element, there has been little research into californium and its compounds since the 1970s.

Now, a group of researchers has isolated and characterised a californium sandwich complex. One major challenge was the small scale they had to work on due to the very limited supply of californium. During their synthesis, the researchers used just two milligrams of the element. The team opted to work with Cf-249, which has a half-life of around 350 years. It offers more stability than other isotopes, some of which have half-lives of mere minutes.

The team first trialled their synthesis using similar complexes of samarium, gadolinium and dysprosium, which are cheaper and easier to handle. Only after honing the whole process to the point where it could be performed in a single day did the researchers proceed with their precious californium sample. They were able to isolate californium metallocene crystals, which they note are red–orange unlike the typical mint green colour of many californium complexes.

Before using their precious californium sample, the team rehearsed each reaction with several lanthanides until they could perform the entire synthesis in a single day

X-ray studies revealed that the californium ion is bound to two cyclopentadienyl ligands that take on a bent arrangement. The complex is more ionic than expected, which the team say is due to the poor overlap between the californium ion’s 5f orbitals and the carbon atoms’ 2p orbitals.

The team write that the findings ‘represent scarcely studied subtle bonding and electronic changes at a frontier of isolable molecules in the periodic table’.