A molecular trap that exploits Le Chatelier’s principle, driving chemical reactions to overcome thermodynamic equilibrium, has been made by researchers in Germany. The trap is embedded in a reaction cycle in which different coloured light switches on different parts, so it can run forwards and backwards.

Left to their own devices, some reversible reactions (like esterifications or imine formations) reach equilibrium and never go to completion. These reactions can be driven forwards by physically removing one of the products – for example water using a Dean–Stark apparatus. Le Chatelier’s principle says that such a disturbed system will respond by moving towards a new equilibrium state, thereby producing more of the desired product 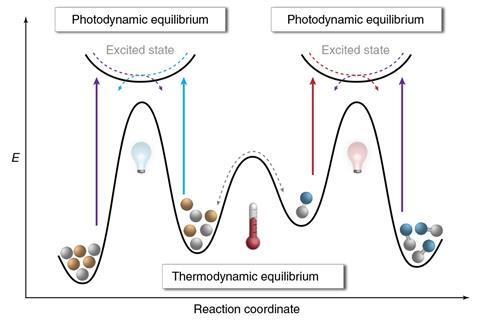 Red or blue light can remove molecules from either side of the thermal equilibrium, causing it to shift further in that direction by Le Chatelier’s principle

This system works in a similar way, but using light-driven photochemical reactions to remove molecules from one side or other of the equilibrium balance, pushing the reaction further in that direction. Similar dynamic reactions could be used to make self-healing polymers.

‘If you are at thermodynamic minimum there is no life,’ says team leader Stefan Hecht from the Humboldt University of Berlin. ‘The idea is to force connection between entities that don’t really want to be connected under the given conditions.’

‘Depending on the wavelength we use, we can push the system all the way to the left [where phenol and amine exist as separate molecules] or all the way to the right, where the two entities are connected [in the form of an aniline],’ Hecht explains. ‘But the cool thing is that we can also go backwards – we can excite the aniline [or the phenol] with UV light, and push it back into the thermodynamic equilibrium mixture.’

‘I like the idea of using light to pump a reaction up an energy hill,’ comments Nathalie Katsonis, an expert on light-responsive systems from the University of Twente, Netherlands. ‘I think we will see more systems based on the same principle in the coming years.’

When coupled to a non-photoresponsive reaction, the switch-and-trap system can also control whether two unrelated chemical species are connected. Hecht hopes to use this effect in self-healing polymers. ‘The major limitation for these materials is that the exchange between bonds is slow and that the bonds are often weak,’ says Katsonis. But Hecht’s system, she adds, is a leap forward that would bring smart polymers to another level.