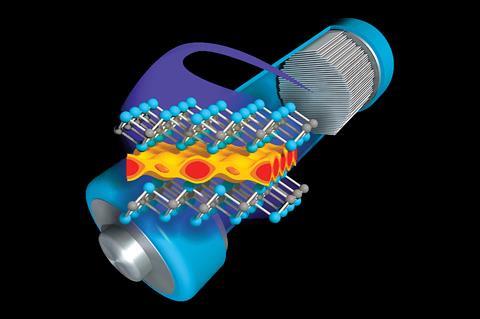 A material has been identified that should have the strange property of being able to both store and lose electrons without the usual associated redox reactions. The redox-less process, predicted to occur in a fluoride-ion based material, could enable long-lasting, high capacity next generation batteries.

‘This is truly weird, but exciting,’ says Scott Warren, who led the work at the University of North Carolina at Chapel Hill, US. ‘This may be the first example of electron transfer without reduction or oxidation, in other words, without the atoms changing their charge.’

In a conventional battery, such as lithum-ion, atoms in its electrodes switch from positive to negative charge and vice versa as they lose or gain electrons when the battery charges or discharges. This means the material’s atoms are reduced or oxidised causing the battery’s electrodes to shrink or grow in volume, by up to 30% in some cases. Over many charging and discharging cycles this eventually causes electrodes to crack and cuts battery life and performance.

‘Scientists are so accustomed to thinking that electrons can be found only on atoms, that everyone assumed that reduction and oxidation were a necessary consequence of electron transfer,’ says Warren. But eight years ago, Warren wondered if a material in which negative ions could be swapped out and replaced with electrons might exist.

The electride can hold charge apart from the atoms in its structure, meaning that electron transfer occurs without chemical reduction or oxidation

Now, Warren’s lab has had success exploring a class of materials known as electrides. These possess a matrix structure that holds electrons in isolation from atoms, offering the possibility of electrons behaving like negative ions and thus avoid redox reactions altogether. Computer calculations led the researchers to potential electride candidates, the most promising being yttrium difluorocarbene (Y2CF2), which models suggest can reversibly lose its fluoride ions to become [Y2C]2+(e-)2, where two electrons replace the two fluoride ions.

‘In the search for high-energy density battery chemistries that can surpass commercial lithium-ion and empower revolutionary applications such as electric flight, fluoride-ion batteries are one of the most scientifically intriguing,’ says Mauro Pasta, who researches energy storage at Oxford University, UK. ‘If validated experimentally, electrides could become one of the most promising high capacity active materials for fluoride-ion batteries.’

‘With a battery electrode that has both atoms and electrons, we can lose electrons during the battery’s discharge process, but the atoms within the material do not become oxidised or reduced,’ explains Warren. ‘Because an electron swaps with a fluoride, and because the electron happens to be the same size as the fluoride, the material hardly changes volume.’ This suggests that cracking and capacity loss will not occur to the same extent as in conventional batteries.

What’s more, the team found that its redox-less battery system has double the capacity of current commercial lithium-ion batteries. This is because converting Y2C to Y2CF2 stores two fluoride ions for every three host atoms. Meanwhile, the best lithium-ion batteries store one lithium ion for every three host atoms. ‘This is why it is all the more surprising that the volume doesn’t change since we increase the number of atoms in the electrode by 66%,’ says Warren.

‘This is out-of-the-box thinking and will have a lot of fundamental importance,’ says Anji Munnangi at Swansea University, UK, who developed the first fluoride battery in 2011. However, he suggests that it will have ‘limited practical relevance for fluoride-ion batteries’, as most known electrides are heavy and they can only store a small amount of charge. ‘I am interested to see how well the material will perform in practical devices.’