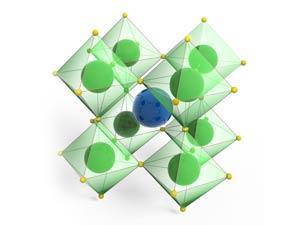 Perovskites are an extremely promising material to fabricate solar cells from

Scientists in South Korea who broke the efficiency record for a perovskite solar cell earlier this year have come up with a new method to manufacture them. The fabrication technique can produce solar absorbers that are capable of breaking the group’s own efficiency record of 20.1%.

Perovskite device efficiency has risen at an incredible rate in recent years – from 14% to 20% between 2012 and 2014. Silicon solar cells took over two decades to achieve a similar feat.  But the performance of perovskites has recently been called into question, with some research groups querying whether they can maintain their stability over practical timescales.

Now, the group from the Korea Research Institute of Chemical Technology has devised a strategy to manufacture perovskite solar cells that is both ‘efficient and cost-effective’. Sang Il Soek and his colleagues placed a lead(II) iodide–dimethylsulfoxide (DMSO) film into a formamidinium iodide (FAI) solution. As FAI has a higher affinity for lead iodide than DMSO, the FAI replaces DMSO in the lattice to form a formamidinium lead iodide perovskite structure. Such a cell has the potential to absorb light from a broader solar spectrum than the most popular perovskite cell currently in production, methylammonium lead iodide.

The team were able to verify that their solar cell has a maximum possible efficiency of 20.2%, which makes it one of the best performing perovskite cells to date.