Magnetically guided nanorobots have been created that can catch pollutants in water. The reusable bots then released the toxic pollutants – the herbicide atrazine and the heavy metal arsenic – when the water temperature dropped. 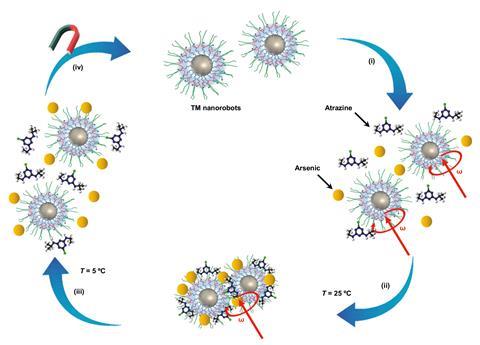 The nanobots can pick up the pollutants arsenic and atrazine, be made to release them at lower temperatures and then be recovered using a magnetic field

Increasing concentrations of micropollutants in the aquatic environment is causing concern, and conventional wastewater treatment facilities struggle to remove them. Solutions such as activated carbon and ozonation can be expensive and resource intensive. A recent review noted that ‘most of the EU countries are convinced that the presence of [micropollutants] in the environment poses a serious problem,’ especially in highly populated regions where surface water serves as a source of drinking water. ‘The most difficult pollutants to clean from water are the small molecules like pesticides or hormones,’ says Martin Pumera, an inorganic chemist who led the research.

The new nanorobots were prepared using magnetite nanoparticles (Fe3O4), coated with a tri-block copolymer (PTBC), which are the ‘hands’ that grab the pollutants. When the temperature rose above 25°C, PTBC dehydration and stronger interactions between the polymer blocks trapped pollutants in the PTBC matrix.

When the nanobots interacted with cooler water at approximately 5°C the matrix expanded and released the pollutants. ‘We used physical interactions with changing temperatures so that the robots aggregated and disaggregated, without any need for chemicals,’ says Pumera.

His lab steered the robots through a litre of water using a rotating magnetic field. ‘The robot moves completely at the will of an operator, who can actively sweep the water and catch the pollutants,’ says Pumera, who stressed the absence of chemicals or light to power the bots.

As a proof of concept, the nanorobots were placed into a low-concentration arsenic solution, 25µg/l. After retrieving the nanorobots from the water, arsenic levels were beyond the detection limit of inductively coupled plasma optical emission spectroscopy. This spectroscopic technique is routinely used to analyse the elemental composition of water samples. Arsenic was snagged through its interaction with a negative charge on the nanorobot’s surface.

‘The approach is quite clever,’ says Bradley Nelson, robotics engineer at ETH Zurich in Switzerland. ‘The big win here is that you can recycle your nanorobots and use them over and over.’ He adds that ‘one of the real challenges is going to be developing an industrial scale magnetic system for generating the magnetic fields’. Also, ‘it will be a relatively complex setup to develop at industrial scale’, says Nelson.

The molecular size or degree of branching of the nanobot’s copolymer hand can also be altered to catch other pollutants. Arsenic was snagged through its interaction with a negative charge on the nanorobot’s surface.

‘If you want to go for other specialised toxic metal oxides like mercury, lead or chromium, which are all carcinogenic, we can change the functional groups, because it depends on the physical reaction between the metal and the nanorobot,’ says author Jayraj Vaghasiya at the University of Chemistry and Technology of Prague, Czech Republic. A mix of differently functionalised nanorobots might therefore be deployed to clean water with multiple micropollutants.

Pumera says that they designed the system to be easy to scale-up, and water treatment experts advised him that any system for cleaning water would have to be inexpensive.