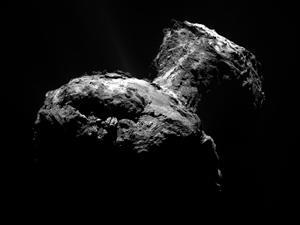 The measurements were taken by the ROSINA-DFMS mass spectrometer on board Rosetta between September 2014 and March 2015. In the areas sampled, the abundance of oxygen relative to water ranged from one to 10%.

Molecular oxygen has never been detected on a comet before, although it has been observed in the atmospheres of icy moons orbiting Saturn and Jupiter. Measurements taken by other spacecraft show the coma of a comet – the cloud of gas surrounding the nucleus – is usually made up of water vapour, carbon dioxide and carbon monoxide.

The observations may help shape new models of how the comet formed. Measurements of the ratios of different gases indicate that the oxygen in 67P’s coma comes from its icy nucleus, which in turn suggests that ‘primordial’ oxygen, present in the giant molecular cloud that gave rise to the solar system, was incorporated into the comet as it formed.