Newest tetrel bond is five times stronger than its peers

An unlikely molecule with a five-coordinate carbon contains the strongest carbon tetrel bond ever found. The compound mimics a transition state in the classic bimolecular nucleophilic substitution.

Discovered only five years ago, tetrel bonds are the carbon group analogue of hydrogen or halogen bonds. They involve two Lewis basic atoms donating electrons into the empty p orbital of a central electrophilic atom. 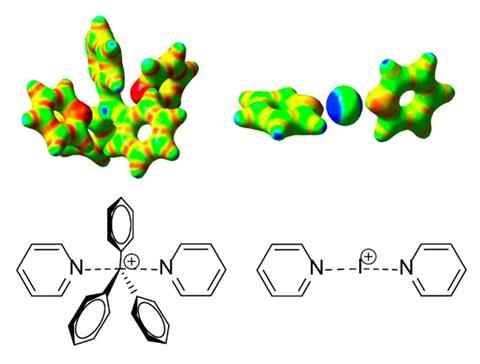 The three-centre, four-electron bond of a hypercoordinate carbon (left) resembles the isoelectronic three centre halogen bond (right). The top images show electrostatic potential mapped with red as the most negative and blue as the most positive

Usually, these three-centre four-electron interactions are weak – less than 10kJ/mol. But now chemists have made a carbon tetrel bond five times stronger by stabilising a triphenylmethylium cation with a bidentate bispyridine ligand. Other carbon tetrel bonds have been made before, but this is the first stable intramolecular one.

The ion takes on a trigonal bipyramidal shape, the same geometry as the activated complex in SN2 nucleophilic substitutions – a pentacoordinate, high-energy configuration found in every undergraduate chemistry textbook. The researchers behind the work suggest their tetrel compound could serve as a model system for investigating reaction mechanisms and chemical bonding theory.