One of the most basic facts that chemistry students learn is the distinct types of chemical bond in solid-state materials: covalent, ionic and metallic, as well as curiosities such as hydrogen bonding. But if a proposal in two recent papers holds up, they will soon need to be taught about another class: the metavalent bond.

According to Matthias Wuttig of RWTH Aachen University in Germany and his co-workers, this kind of bonding is found in combinations of elements in and bordering the metalloid region of the periodic table, such as germanium, tin and lead tellurides. Compounds of this sort, they say, represent a distinct category of material, somewhat similar to metals in having an appreciable electrical conductivity but with a degree of electron-sharing like covalent compounds. Wuttig and colleagues call them incipient metals.1 A two-dimensional map of electronic interactions and bonding in materials. At the interface between metallic and covalent bonds a completely different type of bond can be found, according to a German team

In a covalent solid like diamond the atoms are linked by covalent bonds that leave all electrons paired. In the band structure picture favoured by solid-state physicists, this corresponds to a valence band that is filled with electrons, and at a higher energy an empty conduction band – so there are no mobile electrons and the material is not electrically conducting. Semiconductors typically have the same kind of band structure but with only a small energy gap between valence and conduction band. Then a few electrons have enough thermal energy to jump into the conduction band.

In a metal, meanwhile, the uppermost band is only partly filled with electrons, and they are mobile. This can be viewed equivalently as a lattice of metal ions within a delocalised electron sea.

In incipient metals, these two extremes of covalency and electron pairing, and metallic electron delocalisation, compete. ‘These materials have properties in between metals and semiconductors,’ says Wuttig. The surprise is that the result is not simply a bit of both, but something else again. 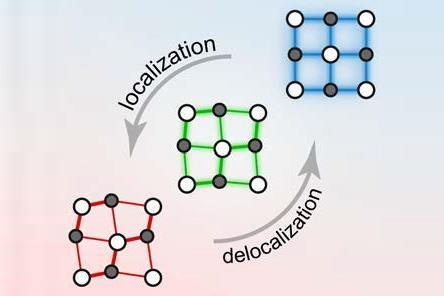 It’s not hard to see that there’s something odd about such materials. For one thing, the atoms tend to have more nearest neighbours than ordinary covalent bonding would allow, but fewer than are produced by the close-packings typical of metals.

One possibility is that these coordination geometries are produced by resonant bonding, like that in graphite, which can be viewed as a switching between equivalent covalent structures. ‘We were convinced that these materials had resonant bonding,’ says Wuttig, ‘and we tried for two years to show that, but failed.’

Another peculiarity of incipient metals is that the bonds seem to break in a different manner from what is expected of a covalent material, as Wuttig and colleagues discovered earlier when they used a technique called laser-assisted field evaporation to dislodge atoms from the surface of needle-shaped specimens.2

It was only when the researchers admitted to themselves that there might something entirely new going on that things fell into place. Describing what the bonds are like in incipient metals like germanium telluride isn’t as easy as it is for covalent or metallic bonds, but there are several key features. For example, the bonds are strongly anharmonic. Whereas covalent bonds can be pictured as being rather like springs, so that the atoms oscillate in a harmonic potential well, for metavalent bonds those oscillations are not simple: it’s as if the springs change in stiffness as atoms are displaced. Along with anharmonicity, the metavalent bonds are very polarisable: electric fields can swish the electron density in one direction or another.

Incipient metals occupy a distinct region in the landscape of properties – for example, they form a cluster with moderate conductivity and high optical dielectric constant. A gradual changeover from covalent to metallic bonding, on the other hand, would be expected to produce materials smoothly filling the gap between them, rather than this distinct island.

Incipient metals also carve out their own distinct domain in a two-dimensional plot of bonding in solids in which the axes denote the number of electrons transferred between atoms (where ionic bonding lies at the extreme) and the number shared (with covalent and resonant-bonded compounds at the extreme).3 The status of these materials as a class of their own becomes more apparent when a physical property such as dielectric constant is added as a third dimension to this map.

Materials chemist John Buckeridge of University College London agrees that the materials in this group ‘have exceptional bonding characteristics and cannot be categorised as purely covalent, purely metallic nor as intermediate between the two’. But he is unsure if a new class of bonding is needed to account for that – he thinks the characteristics might be more conventionally understood as interactions between lone pairs on one of the constituents and p orbitals on the other. He suspects that the new work might, therefore, not yet ‘dig deep enough into the fundamentals’.

Nevertheless, Wuttig argues that their classification ‘will be useful for materials design’. Compounds such as lead telluride and germanium telluride have been investigated for many years for uses ranging from thermoelectrics – which produce electric currents when subjected to a temperature gradient – and phase-change materials for recording and data storage technologies. These properties might be directly related to the unusual bonding, Wuttig says. For example, the phase change in germanium telluride between a crystalline incipient metal and a covalent amorphous material involves a qualitative change in the type of bonding. For this reason, understanding metavalent bonding might assist the rational design of such materials.