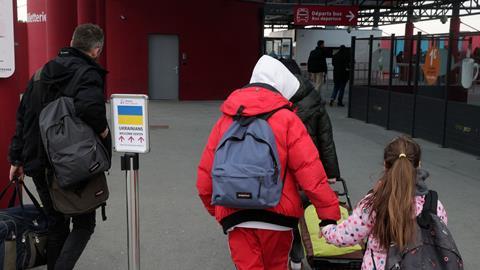 Researchers around the world band together to help fleeing Ukrainian scientists

‘The siren woke us up today,’ says Olena Severynovska, dean of the faculty of biology and ecology at Oles Honchar Dnipro National University. ‘The city was bombarded with rockets.’

Until Friday, Dnipro, a city in in central-eastern Ukraine, had been relatively safe. But on 11 March, three Russian rockets struck a densely populated civilian area. ‘We were relatively calm until that morning,’ says Severynovska.

However, even before this first attack on the city, it had been impossible to work, she says. Everyone stays at home, but she has been trying to keep undergraduate courses running. Some overseas academics have even offered online lectures to Ukrainian students.

Severynovska is one of the many scientists and academics whose life has changed dramatically in the past two weeks. Looking on in horror, their colleagues in the scientific community have come together to offer whatever help they can. Now there is a curated list of research groups from around the world who are offering jobs, scholarships and accommodation. Initiated by Ilfa University of Latvia and supported by national organisations such as the German–Ukrainian Academic Society, this list has grown to include more than 600 universities and has been circulated to all universities in Ukraine.

Yevheniia Polishchuk, vice-head of the Young Scientists Council at the Ministry of Education and Science in Ukraine and a coordinator for #ScienceForUkraine, says the platform is already well-known among Ukrainians. ‘The support is huge. A lot of people try to help Ukrainians and this is a great impact on our resilience.’ She predicts that there will be around 6300 academic refugees with about a fifth choosing never to return to Ukraine.

Severynovska agrees that these sorts of resources are very important. ‘We feel that we are not alone, and we have a future. Even if we cannot use it now, we hope that after our victory there will be an opportunity at a high level to continue scientific research and develop new partnerships.’

Currently, it is hard to respond to these offers, she adds. ‘We were in shock and there was simply no time or energy to think about work, projects or cooperation. During the past week everyone has been helping refugees, the military, the hospital, relatives.’ Additionally, not all Ukrainian scientists have access to a computer and the internet. ‘Some are in basements under constant fire,’ she says. ‘Some are fighting.’ And leaving Ukraine is becoming increasingly difficult.

Despite all this, Severynovska has identified scientists with similar scientific interests and plans to write letters to them soon. ‘I would like to plan joint research and possibly an internship. But maybe a job will be needed. I will not work under the leadership of Russia.’

Vitalii Palchykov, a synthetic organic chemist at Dnipro National University, says the list is an ‘amazing opportunity’ for female scientists. Ukrainian men aged 18–60 are not allowed to leave.

Palchykov now spends his days trying to write scientific papers, but his lab remains closed. He is also volunteering, doing ‘routine’ work like distributing clothes, medicines and food, and making sandbags and molotov cocktails. He has also helped prepare more than 1000 doses of potassium iodide, to be taken in the first hours of radiation exposure.

Looking to the future, he says he fears that Ukrainian science will focus mostly on military projects. ‘I have no doubt that many young scientists will leave the country. This is very sad. I am constantly looking for young scientists for our scientific projects and I understand that it will be more and more difficult.’ In the meantime, he is buoyed by letters from colleagues from all over the world, including Russia.

The #ScienceForUkraine list is already prompting requests for help. Michael Bojdys, head of the functional nanomaterials group at King’s College London, received an email from an analytical chemist at Kyiv University who fled to Lviv with her two children and is now seeking work. However, Ukrainians seeking to come to the UK must secure a visa. The EU allows Ukrainians a three-year residency without a visa.

Until recently, only Ukrainians with a family member in the UK could obtain a visa. A second route, which opened on 14 March, allows a UK citizen, business or charity to house a Ukrainian for at least six months for which they will receive £350 a month. Ukrainians on this scheme will be able to stay for three years and have the right to work.

Bojdys considers this ‘a helpful immediate measure’. However, it’s not clear whether Ukrainian scientists will still have to go through the usual online application process. What’s more, universities charge visa fees for applicants that can amount to thousands of pounds over the course of a PhD. As a result, Bojdys has had to tell his colleague to ‘sit tight’ while King’s College files for a visa waiver. ‘It is absolutely unbearable,’ he says. ‘Remember they are researchers like us; they could be us.’

James Murray, a senior lecturer in biomedical sciences at Swansea University, has been equally frustrated by the visa situation. He received two CVs from Ukrainian scientists, one who is currently in western Ukraine with her two children and mother, and she has relevant expertise for his lab. ‘I had to reply with what little help I can offer: a sponsored approach through the Council for At-Risk Academics (Cara). The Cara scheme can help with obtaining visas, otherwise it’s a struggle. Normally we can obtain six-month studentship visas for interns, but this involves sending institutional paperwork, which, at the moment, probably doesn’t exist.’

In contrast, other countries such as Sweden appear to have offered much more support. The Swedish funding agency SSF, which covers natural sciences, engineering and medicine, has allocated SEK30 million (£2.4 million) to cover salaries for arriving Ukrainian researchers employed by a Swedish institution.

Ten chemistry labs at Stockholm University have signed up to #ScienceForUkraine. Berit Olofsson, dean of chemistry at Stockholm University, is offering lab and office space plus support writing funding applications. She has received requests from undergraduates to postdocs. ‘I have forwarded their applications to people in my network to get a good match with their field of research and got indications that it should be possible to help them out.’ At present, it is individual labs doing their best to find solutions in each individual case.

Canada has also signalled its willingness to help. ‘The government has stated we will take any and all Ukrainians who wish to come with no limits on numbers,’ reports John Trant, a chemist at the University of Windsor, Ontario.

But getting to Canada is difficult. ‘Canada will pay to fly refugees to Canada, but the vetting process is designed to bring people from [UN High Commissioner for Refugees] camps with a longer timeline. I don’t know how this is going to work on the shorter timelines I hope we are using for this.’ His university is also preparing a financial package to support Ukrainian students.

Trant has a Ukrainian student in his group who has gone to fight. He says he feels extremely angry and powerless. ‘But this is something I can do. I can offer funding, PhD positions, postdoc positions, visiting scholar positions. Let’s get scientists out of Ukraine (who want out) to safety and worry about details later.’

Luca Pellegrini, professor of medical biochemistry and pathology at Université Laval in Quebec, is also keen to help. His grandparents were second world war refugees from what is now Croatia. He has already been approached by Ukrainian students looking for help. ‘I have just renewed my core research funding, so I have funds to recruit several PhD students. I decided to allocate at least one PhD student position to a Ukrainian war refugee student and will increase the stipend by 10%. I also plan to cover the cost of air travel. I anticipate that my most important focus will be on accommodating, welcoming and integrating a person uprooted by a traumatic experience.’

How you can help:

The European Chemical Society also has a LinkedIn group to share opportunities for Ukrainian scientists.

Jobs4Ukraine is a curated, EU-wide list of companies that can take up refugee workers and technical staff with immediate effect, and a registry of white- and blue-collar workers seeking jobs.