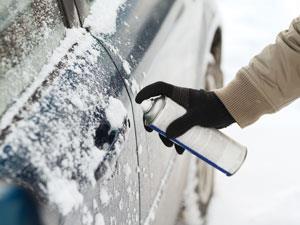 Replacing toxic ethylene glycol – the principal component of antifreezes and de-icers – with the food additive propylene glycol, and adding nanoparticles to improve the mixture’s properties, researchers at US company ACTA Technology have created an antifreeze formula that they say is safer, more environmentally friendly and performs better than existing products.

Although poisonous, ethylene glycol has a sweet taste and every year thousands of people, many of them children, and countless pets and wild animals, are poisoned by accidentally drinking antifreeze. Propylene glycol, on the other hand, is safe to consume, and is used as an additive in some foods to keep them moist. It is already used as an antifreeze in some industries such as food production, but its viscous, syrup-like consistency makes it unsuitable for widespread use.

‘Our goal was to create a non-toxic heat transfer fluid that overcomes the traditional limitations of a propylene glycol-water mix,’ says Michael Minard, ACTA’s chief executive, speaking at the 249th ACS National Meeting & Exposition in Denver, US. Adding metal oxide nanoparticles to the mixture reduces its viscosity, he explains. ‘One of the properties we see is shear-thinning which reduces the viscosity substantially.’

Other researchers working on ‘nanofluids’ like this have struggled with viscosity, adds ACTA’s chief technology officer Edward Clancy, because they use surfactants to stop the nanoparticles sticking together. The nanoparticles that ACTA use, however, are stable without surfactant because of their positive charge and non-spherical, branched chain structure. ‘Because we’re not bound by using a surfactant we’re not paying the viscosity penalty that so many of our predecessors have stumbled into,’ says Clancy.

Replacing ethylene glycol with propylene glycol makes antifreeze non-poisonous, but viscosity has traditionally been a problem

The resulting solution is not only non-toxic, but may actually be more effective as antifreeze, with nearly double the heat transfer capacity of ethylene glycol-based formulations. ‘The thermal conductivity of these metallic [nanoparticles] is much higher than that of the base fluid, so if you put them in you increase the overall heat transfer,’ Clancy explains.

ACTA have patented their antifreeze and are currently investigating ways to scale up production. Minard says the overall cost of making it will be ‘near to or lower than’ ethylene glycol antifreezes, and they are optimistic it will be reach the market within a few years. ‘We believe that the finished product will have a wide variety of uses in various industries,’ says Minard.