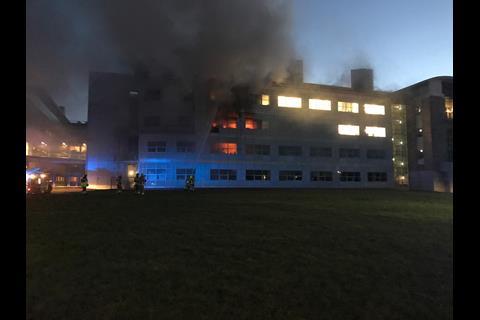 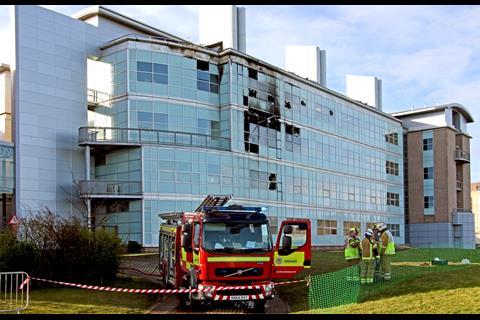 The aftermath of the fire the next day. The fire is believed to have started during a routine glass-cleaning procedure 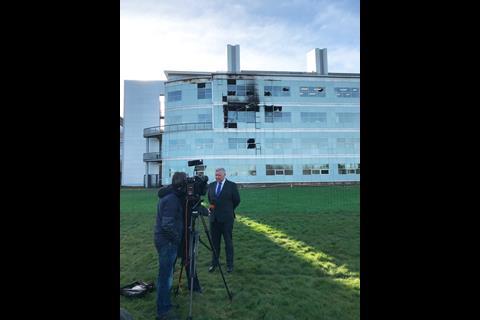 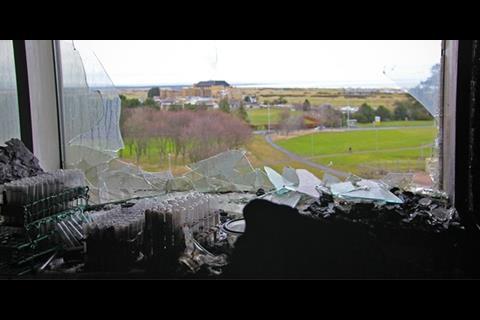 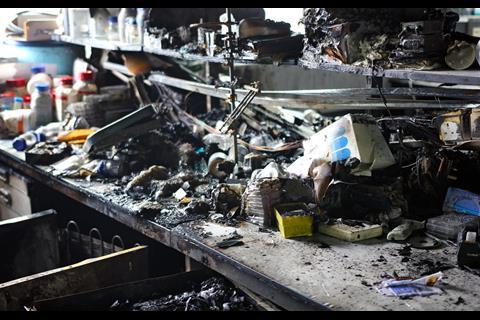 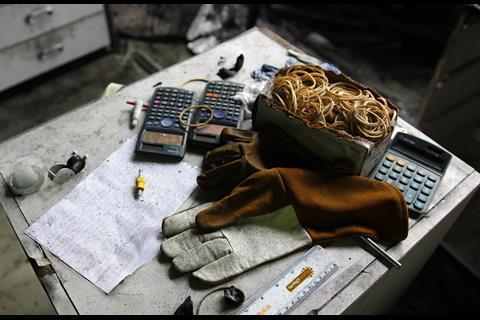 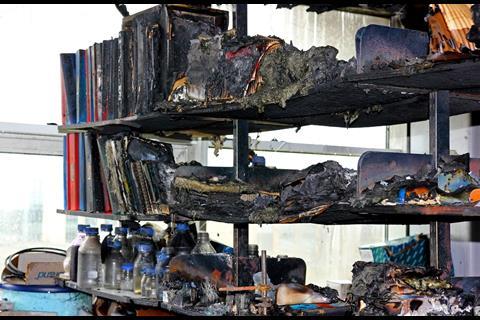 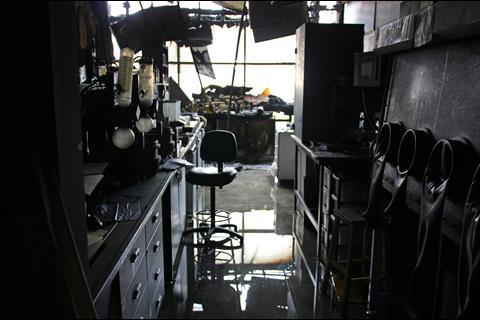 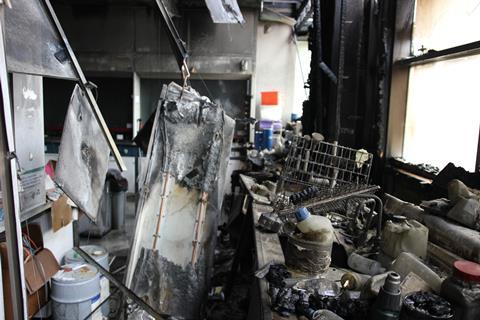 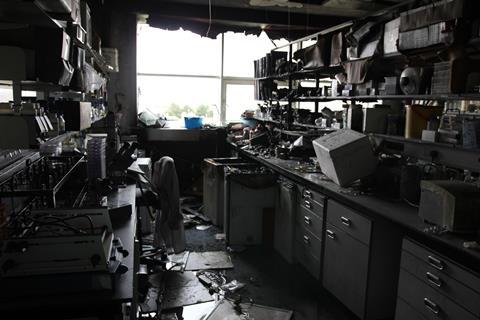 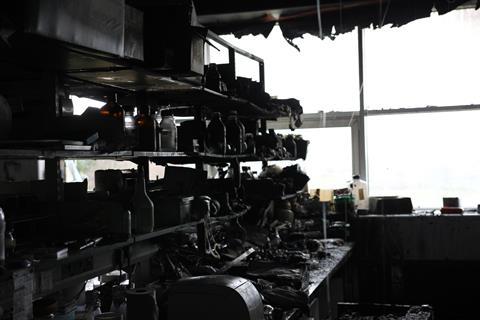 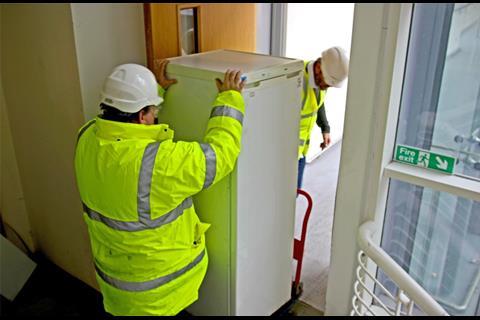 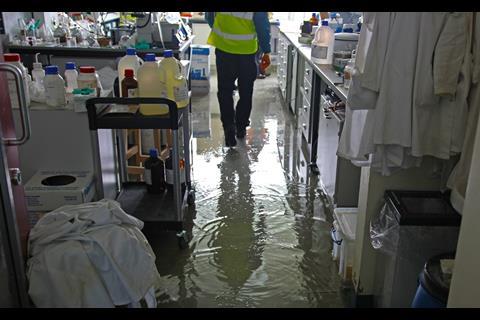 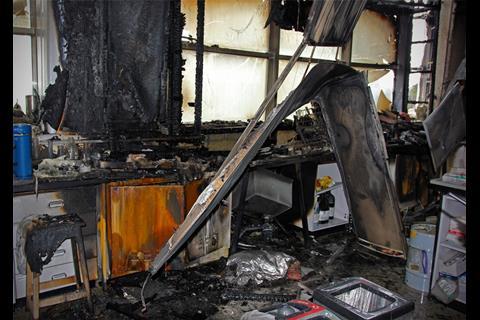 Research teams at the University of St Andrews that have had their work disrupted by a fire have been moved by offers of help from colleagues in the UK and around the world. Last month’s fire at the biomedical sciences building displaced research groups and put many labs out of action. However, researchers are hopeful that most of the equipment and lab supplies were left undamaged and can eventually be recovered.

The fire broke out on the afternoon of 10 February and was attended by the Scottish Fire and Rescue Service. Efforts to extinguish it involved eight vehicles and over 30 firefighters. As a result of fire and water damage the university expects the biomedical sciences building to be out of action for at least a year.

Russell Morris, head of chemistry at St Andrews, tells Chemistry World that investigators now know the fire started during a routine glass cleaning procedure, though they are not sure what the exact source of ignition was and may ‘never be able to say’. In the fire’s immediate aftermath, members of the university’s staff re-entered the building to save precious biological samples from rapidly thawing freezers. Although damage from the blaze itself was limited to a few rooms, the huge amount of water required to put it out has left the building waterlogged and unusable. Those affected have now been taking stock and assessing the damage.

‘Essentially right now we’ve got a whole building out of action,’ Morris says. He explains that the building was shared between the department of biology and chemistry, and while it is the biology groups whose research has been most dramatically affected, there were five chemistry groups on two of the building’s floors that lost their research space overnight. These groups have had to relocate to the university’s main chemistry department building, abandoning any equipment and samples they were working with.

‘We’re squeezing in at the moment, and it’s not ideal,’ says Morris. ‘Everybody takes a hit, especially the people who’ve lost all their stuff. [But] the staff and the students have been absolutely outstanding … really rallied round and made the best of what is a terrible situation… Everybody’s given up some space to allow colleagues in.’

He says that some research projects have been slower to pick up than others, broadly depending on how specialised they are. He stresses that this is a temporary situation. ‘There are opportunities for collaborative visits to other labs and some of those are being planned already.’

When news of the fire broke, offers of help and access to lab space and facilities poured in from ‘universities all over the world from Chicago to Hong Kong’, Morris says. They came from virtually everybody in UK chemistry departments, he adds. ‘It just shows what a great community it is.’

While displaced research groups have been left without access to research materials and equipment, there is a recovery process underway. Morris is optimistic that many of the things left in the building are actually salvageable, provided they have not been damaged by water.

‘We’ve definitely not lost everything. There will be some losses [in terms of equipment and lab supplies] but hopefully we will be able to recover things like samples in lots of areas of the building,’ he says. ‘The fire was pretty localised. So in rooms where there is only water damage … things nicely put away in cupboards and things like that look like they might be perfectly usable.’

He says the process of recovering them is slow, however, as it must be done properly, but he is hopeful that a lot of research – as well as costly apparatus – can be saved. ‘We need to make sure that everything’s safe,’ he says. ‘There was a lot of water around … so we check very carefully for the safety of any electrical equipment that can come out.’

The situation was more critical for biology colleagues who had to rush to get frozen samples out of the building after the power was cut. A report on the university’s website said that for some researchers the damaged caused by the fire has been ‘career limiting’.

Despite the devastation and disruption the fire caused, there are crumbs of comfort for the university. The fire caused no injuries and air quality monitoring has shown that has been no contamination or complications from hazardous chemicals. Teaching has not been affected either, as the building wasn’t used for lectures or undergrad labs, Morris notes.

‘It could have been a lot worse,’ he reflects. ‘We’re just working really hard to ensure that the disruption to the science and the research is kept to a minimum.’