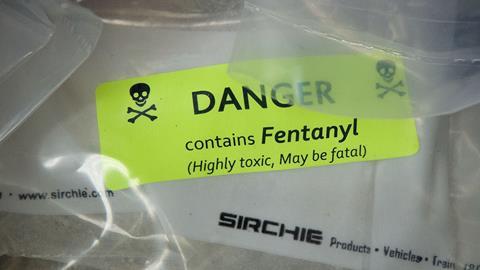 Scientists join the fray in fight against US opioid epidemic

Chemists and engineers are turning their attention to trying to alleviate some of the suffering caused by the opioid epidemic ravaging the US, driven by an unprecedented surge in deaths from fentanyl and other synthetic opiates.

Overall, opioid-related deaths in the US spiked from approximately 18,500 in 2007 to more than 47,000 a decade later, according to the US National Institutes of Health. Overdose deaths linked to synthetic opioids in the country rose more than 45% between 2016 and 2017, the country’s Centers for Disease Control (CDC) estimates. A new CDC report identifies fentanyl as the deadliest drug in the country, causing more than 18,300 deaths in 2016.

Synthetic opioids such as fentanyl are very long-lasting compared with traditional narcotics of abuse such as morphine and heroine. Doses of the current antidotes have not always been potent enough to fully counter the effects of fentanyl, according to Saadyah Averick from the Allegheny Health Network Research Institute in Pennsylvania. He discussed his work to develop single-dose, longer-lasting opioid antidotes using polymer nanoparticles at the American Chemical Society’s spring meeting in Orlando, Florida on 1 April.

‘Apart from the potency of these drugs, the circulatory lifetimes just far exceed those of other materials, and that has really led to a major spike in deaths,’ Averick explained. He added that the antagonists administered to reverse an overdose – such as naltrexone, and even newer ones like nalorphine – are rapidly metabolised, whereas fentanyl and other hydrophobic agonists get sequestered into fatty tissues, creating a reservoir that leaches out as the antidote is metabolised. This means large doses of antidotes must be administered to counteract opioids, which can lead to a so-called ‘precipitated withdrawal’ where there is rapid and intense onset of opioid withdrawal symptoms like nausea, muscle cramping and anxiety.

Averick’s team is trying to come up with a new drug delivery system that can achieve linear, long-acting release of the antagonist to overcome a synthetic opioid overdose. To do this the researchers have been combining naloxone with polylactic acid to create a naloxone polymer. They then turn the polymer into nanoparticles for delivery. ‘With our system, we are able to control a lot of the material properties, release rate and drug loading to have a very customisable yet robust drug delivery system for fighting the opioid crisis,’ Averick said.

His lab has been working on opioids for several years, but quickly became concerned by fentanyl’s toxicity. ‘We were actually working on long-acting pain medicines involving opioid derivatives, and we realised that with the proliferation of fentanyl there was no way that this was not going to be a national crisis, and so we wanted to make longer lasting antidotes to counteract the lifetime and the potency of fentanyl,’ he said.

Beyond better opioid antidotes, there are other issues that must be addressed to effectively battle the ravages of opioid addiction. One of these is better opioid detection tools. Many standard chemistry techniques can be used to identify fentanyl and other synthetic opioids, but these mean taking a sample back to the lab.

First responders to an apparent overdose need answers fast to which drug is involved because fentanyl is an order of magnitude more potent than heroin or other common narcotics. Accidental exposure through inhalation, for instance, is also a real risk to emergency personnel, explained Subith Vasu, a mechanical engineer at the University of Central Florida.

In August 2018, the US Drug Enforcement Agency warned that accidental exposure to synthetic opioids like fentanyl was one of the most serious threats to law enforcement officers. The agency has cautioned fentanyl can be absorbed through the skin and accidentally inhaled. ‘You have got to protect the first responders and police officers,’ Vasu said. He pointed to reports of individuals falling ill, and even dying.

Vasu discussed his ongoing work with colleagues to develop intelligent sensors for fentanyl and related compounds. His project, funded by the US Defense Advanced Research Projects Agency, aims to develop a handheld detection device that uses terahertz reflection detection. ‘You analyse that reflected compound’s spectrum and you can say what compound it is – whether it is fentanyl or sugar, for example,’ Vasu explained.

A major challenge is that there are hundreds of fentanyl derivatives that have common features, so this detection device needs to be selective. Fortunately, these compounds share some common features. ‘You can look at this fingerprint and look at the spectrum and you will be able to say whether it is related to fentanyl or not,’ Vasu explained.

Vasu and colleagues are six months into the two-year Darpa project, and they are currently at the lab-scale testing phase. ‘We have a prototype,’ he said. ‘The system still has to be validated, then it goes through a series of testing.’ To complete the project, the team will partner with a local county opioid task force, which has labs that house substances like opioids. ‘They have already offered to help me,’ he said. ‘Getting fentanyl samples for lab studies is very, very difficult – you have to apply for a [Drug Enforcement Agency] licence, but I can go to their lab and get access to such samples.’

Nevertheless, Vasu acknowledged that there are still a lot of technical challenges that need to be solved before his device is ready to go into the field.